The skiing and riding should be epic today here at Timberline. Don't let the warm weather fool you, we have been salting nightly. Spring skiing and riding is awesome! Grab your gear, come on up and enjoy.
Not ready to put away the skis or snowboard yet? Don't do it! At Timberline you can ski or ride all spring, and summer too!
Camps info
Timberline Lodge Summer Camps

And they are more than willing to prove it. The 2011 FIS Alpine World Ski Championships in Garmisch-Partenkirchen promises to be a celebration of sports for all nations, for the youth and adults alike. The German hopefuls Maria Riesch and Felix Neureuther support the application with all their heart and soul: "We are convinced that the FIS Alpine World Ski Championships in Garmisch-Partenkirchen in 2011 would increase the popularity of ski sports enormously, even far beyond the German borders." Rosi Mittermaier and Christian Neureuther also support the application with deep conviction: "There is hardly any other place that fantastically combines nearly perfect infrastructure and top level conditions for World Championships."
Garmisch-Partenkirchen and its wonderful landscape have enthralled the fans of alpine skiing for generations. Fantastic runs encourage world class athletes to strive for new achievements. The races down the "Kandahar" are legendary and the slalom races at "Gudiberg" push athletes to their limits. The ski circus already meets at annual FIS World Cup races in the county of Werdenfels - a good reason to confer the 2011 FIS Alpine World Championships to Garmisch-Partenkirchen, to the region, to the whole of Germany. We are ready for it!

Welcome to the new facilities at Holmenkollen in 2011! Five years from now Oslo, the capital of Norway, is prepared to host the FIS World Ski Championships in the Nordic disciplines. The venue will be the famous Holmenkollen, where new facilities will be built to meet the demands of the future. The old jumping hill will be dismantled and replaced by modern facilities. The Cross-Country stadium and courses will be upgraded as well. The famous jumping hill at Holmenkollen has been extended 18 times. The new facilities there will include: • A less steep inrun with a freezing capacity • Reconstruction of the lower part, from the jump until the end of the outrun • New grand stands for spectators • Better working conditions for the media • New facilities for competition management, including jury and judges, media, coaches and athletes • New lift • New floodlight system • Permanent wind protection measures However, the architectural fingerprint of the old hill will be retained in order to maintain the famous Oslo skyline!

***
The Toronto Ski, Snowboard & Travel Show is the largest event of its kind in North America. For the more than 30,000 ski and snowboard enthusiasts who will attend this year’s Show, it’s the unofficial start of winter since it’s an exceptional once-a-year opportunity for devotees to meet 200 exhibitors all under one roof. Winter sport exhibitors feature the latest in equipment, fashion, resorts and travel advice. Visitors come to see and purchase the latest equipment from retailers representing the major manufacturers including Elan, Burton, Rossignol, Atomic, Flow, Columbia, Phoenix, Avalanche, Sims, Head, Salomon, Dalbello, Nordica, Serengetti, Salice, Oakley and Kombi. There are bargains galore, with special deals on skis, snowboards, boots, bindings, poles, goggles, helmets, clothing and other accessories for snowboarding and skiing. Skiers and snowboarders spend millions of dollars on equipment and arrange travel to virtually every corner of the earth to seek out winter adventures. More than 100 resorts in Canada, the U.S.A. and Europe present ski and snowboard vacations of a lifetime. In addition to the exhibit area, the show is famous for entertainment and special features. The Toronto Ski, Snowboard & Travel Show Automotive Building, Exhibition Place Thursday, October 12th . . . . 3:00 p.m. - 10:00 p.m. Friday, October 13th . . . . Noon - 10:00 p.m. Saturday, October 14th . . . . 10:00 a.m. - 9:00 p.m. Sunday, October 15th . . . . 10:00 a.m. - 6:00 p.m. Admission Adults: $14.00 Juniors: $9.00 (Ages 6 to 15) Seniors: $9.00 Children (under six years): Free when accompanied by an adult Family Pass: $35.00 (two adults & two juniors) Incorporated in the Show is one of the world’s largest ski and snowboard swaps, presented by the Canadian Ski Patrol System - Central Zone Ontario. Proceeds from the Swap help support ski patrol activities at resorts across Canada. Ski and Snowboard Swap Thursday, October 12th . . . . 3:00 p.m. - 10:00 p.m. Friday, October 13th . . . . 1:00 p.m. - 10:00 p.m. Saturday, October 14th . . . . 10:00 a.m. - 9:00 p.m. Sunday, October 15th . . . . 10:00 a.m. - 6:00 p.m. The Automotive Building at Exhibition Place is conveniently located near downtown and close to major highways. There are acres of indoor and outdoor parking. The facility is also served by the TTC and GO Train. Detailed information is at:
Toranto Ski Show

The Calgary Snow Show is scheduled for the Roundup Centre, Stampede Park for November 3, 4 & 5, 2006. Registration information is available at the website:
Calgary Snow Show 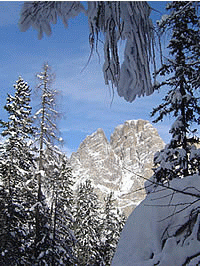