***
WASHINGTON (Reuters) - The United States will have warmer-than-normal temperatures this winter in most of the country, except for the northern Plains and Northwest states, government weather experts predicted on Tuesday.

As for precipitation, it will be drier than average across the Southwest and the Southeast, the National Oceanic and Atmospheric Administration projected in its winter forecast.

The Ohio and Tennessee Valleys, northern Rockies and Hawaii will be wetter than normal this winter, the agency predicted.

NOAA also forecast a weak to moderate La Nina weather phenomenon, which is marked by unusually cold temperatures in the eastern equatorial Pacific, during the 2006-2007 winter.

"La Nina is here, with a weak to moderate event likely to persist through the winter," said Michael Halpert, head of forecast operations and acting deputy director of NOAA's's Climate Prediction Center.

In the U.S., La Nina usually brings wetter weather to the Pacific Northwest and dryer warmer weather across the South.

"The big concern this winter may be the persistence of drought across large parts of the already parched South. And while December through February is likely to be another milder-than-average winter for much of the country, people should still expect some bouts of winter weather," Halpert added.

* above-average temperatures in the Northeast and Mid-Atlantic in response to the long-term warming trend.
* milder-than-average weather in northern Alaska and above-average temperature and precipitation in Hawaii
* across the country, according to NOAA's heating degree day forecast, December through February will be 2.8 percent warmer than the 30-year norm, but still 1.3 percent cooler than last winter.
NOAA

Move off the piste and into the park with the Rip Curl K2 Sista Sessions. This is a strictly girls' only event! 2 days of coaching will have you riding like a rockstar
www.mtruapehu.com
***

Banff Centre Events
October 12
Tales On Tunnel Mountain
Tim Bowling explores history, life, and current affairs in poetry and prose; acclaimed humourist Will Ferguson takes us on a Depression-era romp with one of his most beloved characters; and Roberta Rees immerses us in the lives of three generations of women from the Crowsnest Pass.

The Beat Goes On
Relax in one of Banff's top night spots and see performances by three of today's hottest talents. Meet the wild anti-hero of Joel Thomas Hynes's Right Away Monday, find out what Ray Robertson and Jack Kerouac have in common in What Happened Later, and see Morganics claim his crown as one of the best hip hop talents today.

Poetry Cabaret
Mike Lent and fellow musicians join the poets for a cabaret-style celebration of marvellous music and varied versification.

October 14
The Writing Life
Leading authors talk candidly about the challenges, frustrations and rewards of being a writer.

In the Blood
All families have stories. Four masters delve into the roots of family dynamics to recall stories that encompass the ritual patterns of years or even generations.

Music
October 3 and 10
Midweek Medley
Concerts feature a range of music - from the classics of the great masters to the exciting works of modern composers.

***
The Dolomites - Italy
Dolomites, which is a good sign for the winter season that will be starting on December 1, 2007. Also this year we have lots of great news for our skiers, that will make skiing in the Dolomites even more enjoyable. New Lifts
New lift facilities 2007/2008
More comfort and safety, better slopes and connections
For years the ski resorts belonging to Dolomiti Superski have been constantly working towards modernisation and quality improvement for the joy of everybody. Rather than the creation of new ski resorts, more attention has been put towards the constant improvement of the already existing lift facilities, more safety and comfort, better and safer slopes and smoother connections that do not require you to take off your skis. During the summer seven new lifts have been built (substituting the already existing lift facilities), various slopes widened to increase safety and the artificial snow making facilities upgraded. 90% of the slopes can now be reached by the artificial snow making facilities making Dolomiti Superski one of the top ski regions in the world.


IOC Coordination Commission, will lend his support to the 2014 Sochi Organising Committee over the seven years leading to the staging of the Games, and Gilbert Felli, IOC Olympic Games Executive Director, accompanied the IOC President. IOC member in Russia Vitaly Smirnov and Russian Olympic Committee President Leonid Tyagachev were also present during the meeting.

“Sochi's project is very ambitious,” said Rogge during the meeting. “We have learned from experience that every minute counts in the preparation of the Olympic Games and we are pleased to see this has been understood at the highest level of the government. We have every confidence that Sochi will bring together a solid and experienced team that will move things forward swiftly.”

Teton Gravity Research -
LOST AND FOUND is the story of the extraordinary season of 2007 as seen through the eyes of world-class skiers and snowboarders. With global drought persisting and ski resorts closing around the world, athletes are forced to follow the snow, sending them deep into the uncharted north country of Alaska and Canada. Filmed almost entirely in North America, LOST AND FOUND is a testament to the terrain and conditions that only exist in the Western Hemisphere. This film will take you into the vast, unexplored Tordrillo Mountains of Alaska, proving that some of the best big mountain riding in the world is still completely undiscovered. Athletes take advantage of the bountiful winter in British Columbia, hit disturbing park features in Aspen and score over-the-head powder pillows at Skeena Heliskiing. The winter of 2007 was feast or famine; LOST AND FOUND documents the feast. PLACES: Tordrillo Mountains AK, Skeena Heliskiing BC, Jackson Hole, Utah, Montana, Aspen, Pemberton BC, Kicking Horse BC, Austria, Switzerland and The Candide Invitational. -TGR. 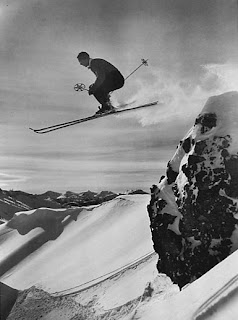