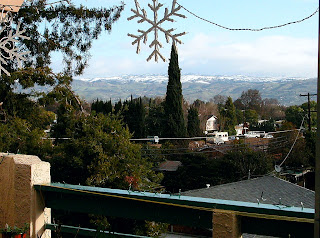 Photo: View from my office of Mission Peak ( Diablo range behind San Jose )
***
Cortina d'Ampezzo - Italy
Individual and group lessons are organized every year by the ski schools which also offer you the possibility to test your capacity with the numerous ski competitions for adults and children.

For the 07-08 season a lot of offers are waiting for you, like the special rates for children & parents 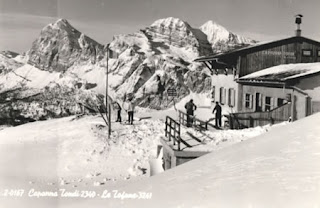 You can think about the ski teacher like a friend or a tourist guide, who is always available to give you suggestions about the resort and all its activities. Information about the events, town traditions, place to have dinners; a lots of secret you can discover with the help of your instructor and for the children, specialized ones will take care of your sons.

To get to the slopes you don't need the car, thanks to the efficiently ski bus service and some of the schools offer you the shuttle service directly from your home to the lifts.

Conditions are fantastic!!! Forecasts call for significant accumulations to continue www.kirkwood.com/winter/weatherresports.php. Kirkwood has the most new snow in Lake Tahoe and currently is a frontrunner for the largest base depth in North America!

Jacobellis, the current back-to-back SBX world champion, pressed the rollers and dominated the turns in a competitive run that brought the Olympic silver medalist another X Games title.

"This win feels good because you're coming back from not winning and it means a lot to break my way through the pack again," Jacobellis said.

The race was incredibly tight between Jacobellis and Canadian rookie Dominique Maltais, but Jacobellis stayed on course and brought home the gold.

"Her race was so tight, it was really one of the most exciting races I've seen for Lindsey. She went for it in that last step up and totally popped it to make it all the way over," said Head Coach Peter Foley. "Even if Dom hadn't crashed, Lindsey still would have beaten her because she jumped that jump all the way and had more speed."

"At the top, your legs are still screaming at you from the race before and I just tried to get my best start and hold my line," Jacobellis said. "I could hear the people behind me the whole time and I was like, 'Don't give up any speed.' I was really happy that I was able to pull it off."

Earlier in the week, Jacobellis, who is at the top of the snowboardcross World Cup standings after winning the 2007 crown, said she was hoping it would be her turn to return to first place. She had won three years in a row, but took home silver in the X Games last year.

"She's been riding pretty well and she was confident in her abilities. She still had to deal with the nerves but she certainly felt like she could do it. There's a lot that's outside of your control in snowboardcross, but it was great," Foley said. "That was pretty sweet and I'm really excited for her."

"It's an awesome course. I love it here in Aspen. Three in a row, it's so sweet," Holland said. "It's such a long course. Bacca [Curtis Bacca, his board technician] has my board running hot right now, so I just know I can break away out of the draft and just stay aerodynamic and bring home the three-peat. Woo!"

Going into the race, the U.S. Snowboarding Olympian said although he was hoping for a third success he was going to ignore his two prior wins and focus on his race and having fun.

"He rode great. He had to mix it up a lot. It wasn't like he was in the lead the whole time," said Head Coach Peter Foley. "He had to make a lot of passes but he just really concentrated on doing the features well, tucking like crazy and just really working the terrain. He was going so fast it was amazing."

Riding alongside Holland were teammates Graham Watanabe (Sun Valley, ID) and Seth Wescott (Carrabassett Valley, ME), who was hoping to pull off his first win in his 11 years of X Games competition. Unfortunately, a crash with Watanabe and Derek Wintermans (Canada) kept Wescott, the Olympic gold medalist and 2005 SBX world champion, who is coming back from an arm injury, off the podium.

"He's riding pretty well, but he's just not quite in form yet. From what I saw, Seth made that mistake himself," Foley said. "His board was running a little faster than it has been and his timing was off because he was going so fast. He made his own mistakes. I don't think it was anyone's fault from what I saw on the video."

The boarding competition continues at the X Games on Sunday with the men's halfpipe competition airing live on ESPN HD at 9 p.m. ET (7 p.m. MT).

***
Kimberley
Easter (North Bowl) side of the resort will get attention.

NEW Trails – For those who want to explore a little before you reach the base area, or for those staying on the mountain, the North Star Trail will take you from below the skier bridge amongst a tree lined, low angle trail to your destination in the Resort plaza. Moe’s Trail – A new intermediate trail to the skiers’ right of Boundary Run. Nate’s Way – A new access trail from the Top of the Tamarack Chair to the Stemwinder Run. New designated FIS Homologated run as part of the Kimberley Paralympic program
Kootenay Cup Race

***
Top International Resorts
I'm not surprised that I disagree with a leading trade magazines picks for top ten resorts
Here are my picks with comments: ( Just an opinion! )
The magazines pick of Deer Park must be based on advertising budget or Family friendly? Deer Park , yes a good resort. But Number # 2,......
maybe,... when I'm 80 years old.
my Top Ten:
1- Chamonix
2- Verbier
3- Zermatt
4- Val d' Isere - Tignes
5- Courchevel
6- Grindelwald ( Interlakken, think the Eiger and the valley below.)
7- Kitzbuehl ( The race coarse is a legend in itself) 8- Stubai Glacier ( Open year round , when you just gotta have some ) 9- Les Arcs ( great place for speed skiing ) oh you meant N. American, Ok,..


1- Whistler- Blackcomb ( big vert, big village,"Big Bang",spanky's ladder, enough to host the Olympics )
2- Squaw Valley ( steep enough for a long list of X-treme skiers & riders, look at a few Warren Miller movies,The Palisades, KT-22 )
3- Snowbird- Alta ( the powder is famous, Pipeline, bookend, coffin chutes)
4- Mammoth Mountain ( tough to argue with a season that routinely has lifts running in June or July )
5- Jackson Hole
6- Kicking Horse or Panorama
7-Timberline Lodge ( because the lifts run evey month of the year that snow base allows)
8- Killington those on the east coast will think I am completely biased if I omitted the beast !
9- Telluride were you expecting the big "A" in Colorado?
10- A long list of ties. Depending on YOUR qualifiers.

Your action / panoramic pictures are wanted ! 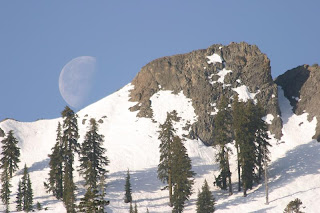 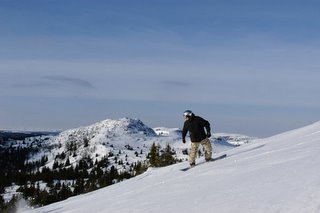 Kvitfjell
Kvitfjell is not the largest ski destination in the world, but many people declare that it is one of the best. The reason is probably the variation of the slopes skiers will find here. For the youngest as well as for beginners we have small bunny hills and for the more advanced skiers we can offer steeper slopes where the skies really catches wind. Skiers at all levels will find their own challenge in Kvitfjell that is why so many ski enthusiasts return to our destination. 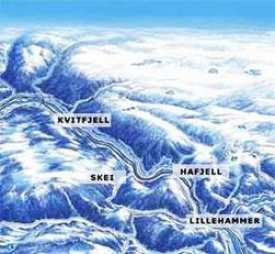 Quality is our motto. Everything that has been and is being build here in Kvitfjell is of the highest quality, and that includes the destination as a whole. More than NOK 200 millions has been invested into different projects, which results in that Kvitfjell is one of the most modern state-of-the-arch destinations in Norway. Kvitfjell is able to cover approximately 80% of all slopes with artificial snow and due to this we are one of the first destinations to open every year. Number of lifts: 7
Lift capacity: 8100 p/h
Longest run: 3500 m
Vertical drop: 840 m
Highest mountain: 1044m

There are many reasons why you should visit us in Kvitfjell this winter. From Kvitfjell you have access to more than 600 km of cross-country trails, a snowboard/terrain park, great ski instructors who will teach you to enjoy skiing, one of Norway’s most luxurious hotels in the mountains, etc. Kvitfjell
***