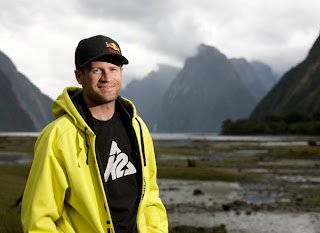 Shane McConkey (December 30, 1969 - March 26, 2009). Born in Vancouver, British Columbia,[1] McConkey was a professional skier based out of Squaw Valley, California. He won numerous awards and competitions. McConkey started as a competitive freestyle skier, but moved on to be featured in a long line of extreme skiing movies. McConkey was known for combining BASE jumping with skiing, as seen in such feats as skiing into a BASE jump off the Eiger. McConkey went to Burke Mountain Academy. He was also known for his contributions to ski design, notably being the father of reverse side cut and reverse camber skis (aka: skis with rocker), first with the Volant Spatula and, more recently, the K2 Pontoon ski design.
On March 26, 2009, McConkey was killed while skiing in the Dolomite Mountains in Italy. He and his skiing partner JT Holmes were skiing off of a cliff while wearing parachutes; after doing a double back flip, McConkey was unable to deploy his parachute because his ski failed to eject, and he crashed to the ground. His parachute did not malfunction, it was never deployed. He died on the scene


Shane did a double backflip and then had some difficulty," said Gaffney. He uses these old-school Tyrolia bindings, which release upwards, and they have straps attached that he pulls on to release the skis. So he pulls the bindings, the skis release, and then he flies away in the wingsuit.
"He got one ski off, but then was fighting to get the other one off. In the whole process, he went upside down and had one ski above him, which caused him to spiral. And then he got into a high-speed spin. He was still fighting to get out all the way down. J.T. watched the footage again because he wanted to know what happened. It was hard to see, so this is speculation, but it looked like he was going for his pilot chute. Maybe he couldn't get to it—he'd complained before that the wingsuit was tight. But we don't know for sure." The fact is that Shane has died, but it’s just so difficult to understand. He was so good and gifted that we really didn’t believe this could happen, even though the risks were sometimes high. Shane McConkey, who appeared in several ski films such as Steep, was one of the brightest stars in the industry. He was a role model to many of us. I really admired Shane’s positive mindset, smile, kindness and courage to live his life exactly the way he wanted. He lived large, every minute. Shane McConkey was truly an inspirational person whose lifestyle so many people followed
Alpine Deal
Tahoe's Unfiltered Alpine Homewood Pass
Valid 7 Days a week, No blackout period, at both Alpine Meadows & Homewood Mountain Resort.
Adult (19-61) $649
Teen (13-18) $199
Child (12 & Under) $149
Child (4 & Under) FREE
Senior (62-69) $369


Unlimited Spring Ticket If you've purchased a Spring Ticket, take $99 off the Unfiltered Adult or Filtered pass & $49 off the Midweek + Sunday Pass! Discount must be done in person or download and mail in season pass form
Short on Cash? Pay $100 Now; Pay the Rest Later Drop $100 by May 31st for your season pass, and pay the balance in full by September 30. Offer only available online. Credit cards will automatically be charged for balance due. www.skialpine.com

***
Fernie
Fernie Alpine Resort received 175cm of snow this March. In the last week alone the resort received 50cm and with warm temperatures forecast, spring skiing will be AMAZING! 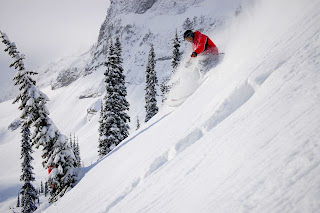 Fernie Alpine Resort is part of the Resorts of the Canadian Rockies (RCR) Family.
www.skircr.com

***
Mad River Glen
The end is near !
They made the call and our ski season will indeed have one last hurrah on Saturday. We will re-open the mountain on Saturday, April 4th from noon until 4 PM. The skiing on the upper part of the mountain should be pretty darn good while the lower reaches of the mountain are very, very thin. There may be some walking involved to get down to the bottom so be aware.
Saturday will be the last opportunity to get some spring turns in (via lift) at our beloved Stark Mountain. It will also be the last opportunity to rescue your mugs out of General Stark's Pub before the summer. We implore you to take them home with you at the end of the year. Please come on Saturday to have a final beverage with us, bid your goodbye to Gen. Stark's Pub, and take your vessels home. If you can't make it up to the mountain this weekend stop by during the off-season contact the office staff and we'll make sure to pull it out of storage for you. Thanks for your patronage
The Mad River Glen General Store enjoyed a fabulous inaugural season. Thanks to Betsy Jondro and her staff for doing such a great job. To celebrate their success the General Store is in the midst of and End-of-Season Blowout Sale. The store will be open from 11 AM to 5 PM on Saturday only so come on in to take advantage of the unbelievable deals
www.madriverglen.com 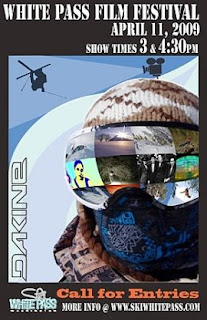 LIFT-SERVED TERRAIN will operate daily through 4/12. We will then move to weekend operation (Saturday & Sunday only) through 4/26. There is a chance we will operate the first weekend in May - watch the website for details.
www.skiwhitepass.com

***
Big Sky - Montana
Powder Day!
Surface Conditions: Powder
Today's Word: I hope your legs aren't too tired just yet because it looks like Big Sky is going to keep having great snow for the rest of the season! It snowed like crazy all day yesterday, so yet again we're facing another amazing powder day, with over 2 feet since Tuesday just on the lower mountain.
Call the Snowsports School today at 406-995-5743 to book your slot for the Zip Line tomorrow!
Deal of the Day: Free Shea butter upgrade in the Solace Spa with the purchase of a 50 minute or longer treatment.
www.bigskyresort.com

***
Crystal Mountain -Wa
8" IN THE PAST 24 HOURS
& 15" IN THE PAST 48 HRS!
The insane spring snowfall is continuing into April- 19" so far this month! Over 12 feet of snow fell in March- that's more snowfall than any March in the past 15 years. It is deep!
UPCOMING EVENTS
Silver King Junior Freeskiing Championships April 1-5
Dummy Downhill April 11
Easter Sunrise Service & Brunch