***
Jackson Hole
The inch of snow we received yesterday was just enough to make our corduroy thick and soft - a cruiser's paradise. Today temperatures on the mountain remain twenty to thirty degrees higher than temperatures at the base, so stay near the summit to enjoy the warmth. Plenty of activities are planned to ensure that you ring in the new year right.
Snow Depth 53" @ Upper-Mountain 46" @ Mid-Mountain
Today's Forecast
Expected Highs
Upper-Mountain: 27°F
Base: 15°F

Patchy fog before 11am. Partly cloudy, with a high near 15. Light NNW wind.
Steep and Deep Ski Camp 1 January 11, 2007 - January 15, 2007 Further develop your skiing skills with this dynamic big-mountain experience that accesses all the adrenaline producing runs and landmarks of Jackson Hole. Includes a guided backcountry experience. For advanced skiers. 800-450-0477
www.jacksonhole.com

The Kitzbühel Ski Area has a white blanket waiting
skiing freaks, boarding fans and of course all those who prefer to cut a good figure on the mountain chalets

The winner gene drives the world’s best skiers forward throughout the winter season; for them second place is defeat. But there is one big skiing event where that does not apply: the most difficult and most fascinating ski race of all, the famous Downhill on the Streif. Here it is still not whether you win or lose, but simply being part of this ski spectacular on 20 - 22 January 2006, when Kitzbühel stages the 66th Hahnenkamm Race
Three days of excitement! As in past years, the 67th Hahnenkamm Race is a guaranteed combination of top-class sport and entertainment. more >>


***
FIS News
Borssen Ends Schild's Slalom Domination
Kildow looking forward to slalom training
SEMMERING, Austria (Dec. 29) - Sweden's Therese Borssen won her first World Cup race Friday night, capturing a slalom when Marlies Schild of Austria, the first-run leader and unbeaten in three previous slaloms, made a mistake at the end of her final run. Lindsey Kildow (Vail, CO), the only American in the second run, failed to finish.
Borssen, who was third behind Schild in the first SL of the season over Thanksgiving Weekend at the Sirius Satellite Aspen Winternational, had a two-run time of 1:55.15 with Austrian Kathrin Zettel, who had the fastest second run, second (1:55.40). Schild, who had been untouchable in slalom until nearly crashing into a slalom pole near the finish line, was third in 1:55.57.
Kildow, the only U.S. racer to qualify in the 30-degree afternoon sunshine for a second run, straddled a gate under the lights.
"Oh, man, a really tough day. But, y'know, you can talk about positives all you want - and there were a couple today - but at the end of the day," SL/GS Head Coach Chris Knight said, "it's results on paper that count...and tonight we don't have a result. Not a one."
He was pleased with Kildow qualifying for the nighttime second run (i.e., top 30 in the afternoon run) "because Lindsey hasn't had any slalom training at all. She caught an edge in Val d'Isere [France] last week and now this straddle...but we've got a couple of days of slalom training coming up, so that should help her a lot." The schedule for the coming week calls for three SL or giant slalom races.
The next women's race is the Snow Queen Trophy race, another night slalom next Thursday in Zagreb, Croatia, and then the annual GS-slalom pairing Jan. 6-7 in Maribor, Croatia.

***
JILIN China
Jilin Province, with a population of 26 million, covers an area of a little 187,400 square meters in the center of northeast China. The Changbai Mountains and the Songhua, Yalu and Tumen rivers are what Jilin's beauty is all about. Vast forests and rich fauna and flora turn the province into an ideal destination for environment-conscious tourists. World-calibre skating and skiing facilities have been established in recent years to accommodate winter sports fans from around the world. the tradition of ethnic culture runs deep in Jilin. The Manchus and Koreans are born singers, and the local folklore sets the stage for a rich variety of tourist activities. Major tourist cities in the province are Changchun, Jilin, Yanji and Tonghua and Baishan.
www.newedu.net/en/jilin/

***
YongPyong, Korea
The Yongpyong Resort is located at a very inhabitable range of 700 meters above sea level. Yongpyong Resort is found at the eastern edge of Asia, about 200km from Seoul, the capital city of South Korea. With an annual snowfall average of 250cm, the surrounding area possesses a beautiful environment, which allows for the enjoyment of a wide array of winter sports including skiing from mid-November to early April. On its 4,300 acres, you will find a 45-hole golf course, 31 ski slopes, premium hotels, European-style condominiums and many other leisure facilities that can be enjoyed by the whole family. The Yongpyong Resort was born in 1975 as the first ever modern facility of its kind in South Korea. Now it is innovating a new leisure culture known as "Korea's Ski Mecca" with a growing reputation as an internationally-renowned resort. 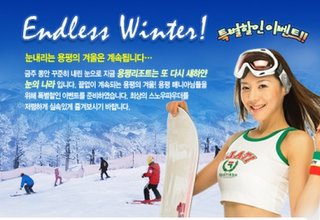