The TELUS World Ski & Snowboard Festival is produced by Watermark Communications, a Whistler sports & entertainment marketing company, and presented in partnership with Tourism Whistler and Whistler Blackcomb. Celebrating its twelfth year as the largest annual winter sports and music festival in North America , the TELUS World Ski & Snowboard Festival is a high-octane 10 day and night showcase of the best of snowsports, music, arts and mountain life. Featuring major professional ski and snowboarding competitions, the largest free outdoor concert series in Canada , the legendary Pro Photographer and Filmmaker Showdowns, and many more unique art and cultural showcases, the Festival is the ultimate wrap party. For information on the 2007 TELUS World Ski and Snowboard Festival, this year from April 13-22

Film-making becomes an athletic endeavour at Whistler’s annual 72 Hour Filmmaker Showdown. The competition, an integral part of the TELUS World Ski & Snowboard Festival’s line-up, challenges artists to perform feats of speed, endurance and precision, with the call to shoot, edit and produce a 3-5 minute digital film set within a 100km radius of Whistler in the space of 72 hours.

The 72 Hour Filmmaker Showdown traditionally spawns a concentrated burst of creative energy in Whistler. The Muses descend en masse, as 100 filmmaking teams are loosed on the resort and are given free range to blow the budget, burn the midnight oil and storm the house to meet a deadline.
As if that’s not alluring enough to the creatively-minded, finalists have a chance to showcase their film to a live audience of 2000 people for the final Showdown.
The Gala screening of finalists is the hottest ticket in town, packing the 2000 seat Conference Centre. Even the unsanctioned Second Cuts screenings sell out.
Previous winners have also received significant exposure, including screenings for the Directors Guild of Canada, at the 2003 Squaw Valley Film Festival, and the 2003 World of Comedy International Film Festival in Toronto .
Winners from the 5 previous years of the competition can be viewed at
www.whistler2007.com.


***
Rich P. sends in a weekend picture from Heavenly Valley 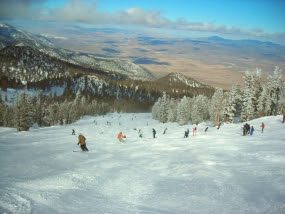 ***
Sugarloaf
It looks like the temperatures will continue to stick around the mid to upper 20s for the rest of the week, which means the corduroy will stay nice and soft. And we've got a possibility of snow by Thursday night into Friday and maybe Saturday.

As February nears to a close, we're looking ahead to all of our events that are coming up in March, including our Nickelodeon and Sugarloaf/USA Winter Fest, a Kids-n-Teens Week and a couple of College Weeks. We also have announced our next Bud Light Concert Series Event - Southside Johnny and the Asbury Jukes on March 17.

With the sun beating on the SuperPipe today, Norton said the snow was just the right consistency. He'll be cutting it again tonight, and he continues to come up with new ideas for The Yard. Check out the latest at www.sugarloaf.com/

***
Steamboat
The path to Huffman's was slow going with about four inches of new snow on it since they groomed, but we eventually found our way to Sundown Express. Riding up, we felt like the only ones on the Mountain. Wind filled in yesterday's tracks making the runs as enticing as a freshly frosted cake sitting in an empty kitchen.

Sideburns and Closets had enough new snow to make this an official powder morning, but there was still some bottom there to help navigate. We escaped via Lights Out and Moonlight. Our next run down Sunshine Lift Line was a rookie powder skier's dream with just enough new on top to float with some speed. South Peak took us to Westside which had a touch less frosting on it than Sunshine.

It's a bit windy today and there's lots of snow, so remember the wax and the neck gator. Enjoy!

Dolomite Superski Resort- Italy
After the fun times at Carnival the winter season in the Dolomiti Superski Resort keeps going with perfect snow conditions. The days become longer, the temperatures milder. Those are ideal conditions to experience snow and sun together with friends and family. Furthermore, on March 17, 2007 the special offers DolomitiSuperKids and DolomitiSuperSun start. Ascertain yourself and spend a few nice skiing-days with lots of sun and relaxation in the most beautiful mountains in the world.

The winter season in the Dolomiti Superski resort goes on until April 10/15, 2007. From March 17 to April 10/15 you can take advantage of the offer DolomitiSuperSun where you get one day free of charge. You stay 7 days at the price of 6 and you get the skipass for 6 days at the price of 5. The offer applies to all participating establishments as well as open ski resorts.
www.dolomitisuperski.com

FREESTYLE WORLD CUP
PENTICTON, B.C. (Feb. 25) - Jeret "Speedy" Peterson (Boise, ID) rebounded from a poor first jump to land his signature, five-twist "Hurricane" Sunday despite snow and winds as he moved up to third place in the final World Cup aerials competition of the season. Lacy Schnoor (Draper, UT) had a personal best in finishing eighth as the top U.S. woman at Apex Ski Area.

Canadian Steve Omischl clinched his second World Cup aerials title with his second win of the season, edging Peterson in the final points, 406-368. Heading into the event, Peterson led 308-306. Sunday, Omischl had 247.49 points for the 12th win of his career while teammate Kyle Nissen was runnerup (238.07) and Peterson vaulted six places to third (231.53) with his successful Hurricane, which includes three flips.

"I would have loved to win but I'm excited about landing the Hurricane with this weather," Peterson said. "I wasn't going to do it today, but I wanted to win the title and I knew I needed it after my first jump if I were gonna beat Omischl."

Laughing as he recalled how he had bloodied his face with a couple of crash landings in training while winning two aerials meets in 24 hours at Utah's Deer Valley Resort in mid-January, Peterson - the 2005 World Cup aerials champion - said, "I took a huge hit in training and I was a little hesitant about doing it. But I wanted to give myself a chance to win, so..."

"Speedy's such a stud," said Aerials Head Coach Matt Christensen. "He crashed in his first landing, so even though we had planned on not doing it - and saving it for World Championships [March 8-11 in Italy], he went out and stuck it. It was amazing.

"These were tough conditions," Christensen said. "It was snowy and windy, and definitely not a lot of fun. Speedy was awesome and Lacy had her best result...and Emily landed her first full double-full [three twists, two flips] in six years, so that was outstanding, too. The energy on this team now is just so great."

Christensen said the aerialists would return to Park City, UT, for a mini-camp and down time before the World Championships. The U.S. Freestyle Ski Team is expected to announce the team for Worlds in the coming week.

In a related development, Christensen said Scott Bahrke (Tahoe City, UT) was chosen by coaches of all national teams on the World Cup as Rookie of the Year. "He was eighth in Mont Gabriel [Que.] last month and Scotty's had a tremendous year. The other coaches noticed, so this is a tremendous honor and a nice tribute to the way he's worked so hard."

Gorgone has now finished in the top 10 in three out of the last four World Cup races as Austrian Doresia Krings took the victory. Men's winner was Canadian Jasey Jay Anderson.

U.S. alpine snowboarders will return to the U.S. for the final U.S. Snowboarding Race to the Cup event slated for March 10-11 at Vermont's Bromley Mountain before closing the year the next weekend at World Cup finals. 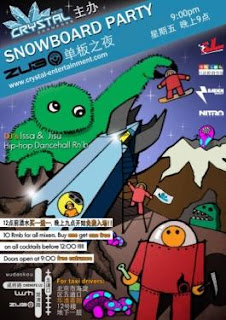 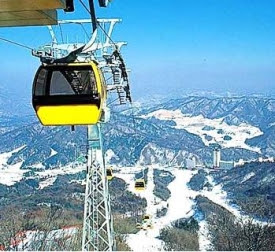 Purchase your 2-for-1 eTICKET on-line for just $49. This is an on-line special offer which must be purchased in advance through our web site.
www.skihood.com


Mountain Operations
Runs Open: 121 / 121
Percentage of Terrain Open: 100%
Lifts Open: All of our major lifts will be turning today
Terrain Park: Ready and Waiting!
Mountain Tip of the Day: Make sure you give yourself a little extra lean-back today as you slay the mountain.