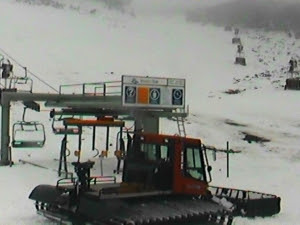 ***
Durango Summer
Upcoming Events
June 15th
Summer Opening Day
Purgatory is open for the summer season. Bring up the entire family for fun on the Alpine Slide, the Bungee Trampoline, Climbing Wall, and more than 50 miles of hiking and mountain biking trails, including the new 7th Heaven intermediate trail.


June 30th KSUT Presents The Iguanas The Iguanas bring their funky music back to the Purgatory Festival Tent on June 30th. The benefit concert raises funds for KSUT, Durango's local non-profit radio station. Ticket and Lodging Packages starting at $59 per person, based on double occupancy. Call the Reservations Center for tickets and more info at 1-800-982-6103
www.durangomountain.com

***
Snowbird, Utah – Richard D. Bass (Dick), owner and Chairman of Snowbird Ski & Summer Resort, will be awarded the 19th Sheldon Coleman Great Outdoors Award, the recreation community’s most prestigious award, on June 12, in Washington , D.C.
Each year, the award recognizes an individual whose personal efforts have contributed substantially to enhancing outdoor experiences in America . Bass will be honored for a career in the ski industry that began in 1962 and flourishes today with his ownership of Snowbird Ski & Summer Resort in Utah .
Bass’ lifelong involvement in the ski industry began in 1962 when he invested as one of the original limited partners in the Vail Ski Resort development in Colorado . Since then, he has served on the Board of Directors of Vail Associates Inc., assisted with Vail's development of the Beaver Creek Ski Resort under his brother, Harry Bass Jr., and owned stock in the Aspen Ski Corporation and the Alta Ski Lifts Company.
Bass began work on his greatest achievement, Snowbird, in October 1969 and had the first lifts turning by December 1971. Bass has since overseen the continued growth of Snowbird into a world-renowned, year-round destination mountain resort, dedicated to the enhancement of Body, Mind and Spirit. SKIING Magazine has ranked Snowbird, along with Little Cottonwood Canyon neighbor Alta, the No. 1 ski resort in the United States for five years running.
In April 1985, at age 55, Bass became the oldest person to reach the top of Mount Everest and the first to climb the highest peak on each of the seven continents. His adventures are chronicled in the book he authored, “Seven Summits.”
www.snowbird.com

IOC RELEASES 2014 EVALUATION COMMISSION REPORT The International Olympic Committee (IOC) today released its evaluation report on the 2014 Olympic Winter Games prepared by the IOC’s Evaluation Commission for those Games. The report was written following the Commission’s visits to the three Candidate Cities vying to host the XXII Olympic Winter Games in 2014 -

Technical Analysis
The report is a technical analysis of the three Candidate Cities, which is sent to the IOC members ahead of the final vote, which will take place on 4 July 2007 during the 119th IOC Session in Guatemala City. The Commission, chaired by IOC Vice-President Chiharu Igaya - a former Olympic silver medallist in slalom - spent four days in each Candidate City (see dates below) to conduct on-site analyses and assess each City’s ability to stage the Olympic Winter Games.

Verbal Report
The Evaluation Commission will give a final verbal presentation to the 119th IOC Session in Guatemala City on 4 July 2007 following the presentations of the three Candidate Cities and preceding the vote for the election of the Host City of the XXII Olympic Winter Games in 2014.

Process
The election in Guatemala City will be the culmination of a process, which began on 31 May 2005, when the IOC asked for National Olympic Committees to nominate cities as candidates for the 2014 Olympic Winter Games. This resulted in seven Applicant Cities, namely Sochi (Russian Federation), Salzburg (Austria), Jaca (Spain), Almaty (Kazakhstan), PyeongChang (Republic of Korea), Sofia (Bulgaria) and Borjomi (Georgia) ¹, being put forward and answering the Applicant City questionnaire. Their replies were studied by an IOC Working Group which produced a report for the IOC Executive Board. Based on this report, three of the seven cities were selected by the IOC’s Executive Board as Candidate Cities at its meeting on 22 June 2006. The remaining candidates have all now produced a Candidature File based on the 17 different themes of the IOC’s 2014 Candidature Procedure and Questionnaire for 2014, which, in addition to the Evaluation Commission’s report, will allow the IOC members to make their final decision.


***
Valle Nevado
Spectacular benefits for Jeep clients Like the previous years, during the season 2007 Jeep becomes the official Snow-covered Valley vehicle. The proprietors of a Jeep will have benefits like 30% of discount in ours hoteles* and 15% of discount in tickets of andarivel*. In addition, the Jeep clients will have preferential parking, gifts and attractive surprises. *Consulte dates and conditions. One season full of supplies and promotions Snow-covered valley will surprise this winter season with attractive packages for the fanatics of the snow. In this sense, it emphasizes “50% of discount for a second passenger”; “Kids Free”; “one night free”; “7x6 in leasing of equipment”, and “2x1” for all those that are in favor of more than seven nights. Between the discounts and benefits that also will receive emphasize a Welcome Drink and to recreate with a pleasing moment, after enjoying the snow they will be able to recover energies tasting the exquisiteces of our Après Ski. To all these benefits it is added, in season Holiday, a daily lunch and a wine bottle by estadía for the passengers of all our hotels. Greater information please to contact to reservas@vallenevado.com or telephone (56 2) 477 77 05. New gastronomical supplies With the arrival of new restaurant and the classic return of of always, Valley Snow-covered the winter season with the best gastronomical supply for the lovers of the good table will inagurará. Under you order of the outstanding chef executive, Juan Carlos Bozzo, new “South” restaurant delay to be a space for the fanatics of the international food, while the return of Don Giovanni, brings of return best prescriptions and secrets of pastes and antigrass. The supply is completed with the outstanding French kitchen of the Fourchette D'or, the Italian tradition of the Trattoria, rich fondue of Him Montagnard, in addition to the Slalon, the Sushi Bar and the rejuvenated one Under Zero. New and remodeladas Snow-covered Valley stores To our already known stores Nautisport, Rip Curl, Rockford, Snow-covered Valley Store and Captura, for this season 2007 the new premises, those are added that besides to extend the supply to our visitors, are a place where the design, the entretención, the sport and the tradition have their space. They are: Aromas and Flavors (typical Chileans delikatessen) The Dolfina (pole clothes) Diesel engine (jeans) L'Occitane and Burberry (natural products of beauty and clothes) Nest of Cóndores (snow articles Burton) Babel fish translation

Props to Bob "The Devel"out at The "Bird" in Utah for hiking out to the Alta Ridge above Mineral Basin just to make sure, It can be Done( Skied ) if you want it ! and don't mind a hike out.

To find information on a resort, event or topic, use the
"SEARCH THIS BLOG "
field at the top of this page.