Enjoy the spring conditions at Titlis
I skied the Ice Flyer late july two years ago and was caught off guard with only a wind breaker in snow flurries.
Can be icy in teh early am
EVENT
Jazz in the Dorfstrasse –

A total of 14 pre-dinner concerts with old and modern jazz will take place in July and August: performances on Tuesdays and Fridays between 5 p.m. and 7.30 p.m.

Become one of the sponsors of this event and contribute a minimum of CHF 150.- towards a thrilling occasion. Our thank-you to you, is a dinner on one jazz evening. Further information is available from: simone.schaerer@engelberg.ch, Tel

Cardrona today announced the purchase of a high speed detachable quad chairlift in Captains Basin. The new Poma chairlift will be ready to ride at the start of the 2008 season.

The Captains Express chairlift’s speed will be two and a half times quicker than the existing quad with a journey only taking 3 ½ minutes versus the existing 9 minutes. Assuming no queue, a person who skied 11 runs at Captains Basin would ski them one hour faster due to faster chairlifts.

“This chairlift is one of the fastest chairlifts on the market and will mean an average Cardrona family will get lots more skiing and snowboarding on an average day”, say Gary Husband, Field Manager.

“By the time the 2008 season starts Cardrona would have invested over $12 million in new developments over the last four years. 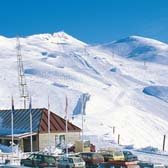 
***
Mammoth Mountain
OPEN
Get a deal while you can
Act now - the Mammoth Season Pass for 2008/09 will only be half price through Wednesday, April 30, 2008. You have three more days to purchase access to an entire season of skiing/snowboarding at one of North America's biggest mountains for just $786 (a $1,675 value). This price will not be available at any time next season

NSAA was established in 1962 and was headquartered in Springfield, Mass. In 1989 NSAA merged with SIA (SnowSports Industries America) and moved to McLean, Va. The merger was dissolved in 1992 and NSAA was relocated to Lakewood, Colo., because of its central geographic location. NSAA is located in the same office building as the Professional Ski Instructors of America and the National Ski Patrol in Lakewood, Colo., a suburb west of Denver.
EVENT
National Convention & Trade Show May 28-31, 2008

***
Sugarloaf - Maine
We will have the SuperQuad turning, accessing six trails, including King's Landing, Hayburner, and Skidder, all of which are covered wall to wall and top to bottom with excellent spring conditions.

Lift tickets will be just $39 for adults and young adults, and just $30 for juniors and seniors. And don't forget, the deadline for the best prices on the 08/09 New England Pass is just two days away (April 30)

This is the final stretch, remember what it's like when mid summer you crave a few turns. Ski now summer may be longer than your wish it was !

CALIF
Alpine Meadows - D8 chutes, Beaver,Butress chutes & Estelle Bowls
Don't miss the Mad Cow Downhill May 4
Mad Cow Downhill a epic spring event at Lake Tahoe
The Mad Cow Downhill is a no-holds barred race to the finish. The race will begin promptly when the general public skier's and rider's are off the hill. There are two classes for this event: Skiing & Boarding; sorry, if you are a mono-skier, your racing with the skiers. This event seperates the men from the boys. But, we would love to see the ladies participate. Each class will be racing towards the finish line to be the first to grab an Alpine midweek season pass. If you don't grab it, it's not yours! Sign-ups will be on the Sun Deck, helmets are required, and you must sign a release. If you are underage, your folks need to sign. For more info, call: 530.581.8210

The Stubai Glacier represents one of the most extensive all-year-skiing areas in the Eastern Alps with 68 miles of slopes and off-slope tracks of all levels of difficulty and a 2.8 mile high altitude cross country slope.

The glacier ski area is complemented by the lifts on Neustift`s local fun mountain, the “Elfer” ski resort. Neustift is known far and wide for its beautiful ski tours.

Approximately 100 youth hostels in all of Austria are open to everybody. Groups and those travelling alone are advised to book in advance.

Lists of youth hostels and detailed information can be found:
- at the Austrian Youth Hostel Association
- at the Österreichisches Jugendherbergswerk

Persons without an International Youth Hostel membership card need a guest card with a ”Welcome Stamp” at € 3,50 per night. Once the card has been stamped with 6 Welcome-Stamps, it automatically counts as a Youth Hostel membership card
Transportation by Rail
The Austrian Federal Railway network has a length of about 5,700 km and connects all major national and international cities.

Vehicles may be transported on the Tauern train through the Tauern tunnel (Böckstein - Mallnitz-Obervellach, 12 km).
http://www.oebb.at/

Hohtälli - Kellensee ski run
To replace the Gornergrat - Hohtälli cable railway an intermediate (red) ski run will be constructed from Hohtälli to Kellensee in the summer of 2007. This new connection will not only dramatically reduce transfer times, but will also significantly improve accessibility to the Gornergrat and Matterhorn glacier paradise. Yet another contribution to making the Matterhorn ski paradise even more attractive!

The improvement of the Matterhorn glacier paradise
Europe's highest cable railway station is getting a completely new look: A lovely restaurant is being built atop the spectacular peak rising 3,883 m above sea level and will feature a hostel for mountaineers and a shop. The sanitary facilities are being renovated as well and will soon include an independent sewage treatment plant.

The glacier palace will soon be easier to reach: The tower is at the very end of the summit tunnel, meaning that in future, guests will no longer need to walk over the glacier.

In addition, a panorama window with a view of the Breithorn and Gornergrat will be created on the peak's northeast face by blasting away rock in the tunnel.
The aim, says Christen Baumann, CEO of Zermatt Mountain Cableways, is to complete this first stage by the end of 2007. At the same time Zermatt Mountain Cableways are preparing construction plans for pyramids, lifts and observation platforms, with the final plans expected to be ready for submission next summer. These plans include the construction of an observation platform at 4,000 metres above sea level - 117 metres above the actual summit - and restaurants, a multimedia room and other infrastructure on the summit itself. "Even in terms of its infrastructure and architecture, the Matterhorn glacier paradise is set to do justice to its superlatives and its uniqueness," believes Zermatt Mountain Cableways chief, Christen Baumann. "It is intended to become yet another Swiss trademark that will complement the existing comprehensive offering."

Cable railway Furi - Riffelberg
In 2006 a new 8-seater cable railway was be built between Furi - Schweigmatten and Riffelberg. The valley station is located on Furi, at the same level as the midway station for the Matterhorn Express. The same 8-seater cars are being used as for the combi cableway Sunnegga - Blauherd, called "level walk-in" cars. At the Schweigmatten midway station, you can embark/disembark in the direction of Furi or Riffelberg. The mountain station lies north of the Riffelberg Restaurant, so that the Gifthittli chair lift can run alongside the skiers to the valley station. The overall costs for this 8-seater cable railway with a capacity of 2'400 people per hour and a diagonal length of 2'085m amount to CHF 18 million.

Heavenly Mountain Resort in Tahoe is open through this weekend. Tamarack, Comet, Dipper and Olympic chairs access 27 open trails, with a jib park on Cascade run.