Bob "The Devil " called this morning on his way up to "The Bird", looks like a late season gift of freshness. Bob is spending the day with John N. owner of www.Slope8.com, Hong Kong's year round ski slope. Enjoy, wish is was with you guys.


***
Mammoth Mountain - Ca
Act now - the Mammoth Season Pass for 2008/09 will only be half price through Wednesday, April 30, 2008. You have seven more days to purchase access to an entire season of skiing/snowboarding at one of North America's biggest mountains for just $786 (a $1,675 value). This price will not be available at any time next season


***
Sugarloaf - Maine
Thermometers have been up over 70 degrees this week, and people have been skiing in t-shirts, shorts, bikinis... you name it. Of course, the gorgeous weather would mean nothing without good snow to ski on, and thanks to 216 inches of it this season, we're still going strong with 78 open trails.

This winter was so good to us that we'll be open all the way into May, well after most other resorts have shut down for the season. We'll be open so late in fact, that rafting season will be underway before we're done skiing. And now thanks to our friends up at Northern Outdoors, we're offering you the chance to enjoy two season in one weekend with the first ever Raft and Ski Weekend.

First Ever Raft and Ski Weekend!
It's a pretty rare year that you're able to ski and raft in one weekend, and thanks to 216 inches of snow this winter, this happens to be one of those years. We've teamed up with our pals at Norther Outdoors to offer you the chance to raft the Dead River on May 3 and ski Sugarloaf on May 4 with great discounts on both.

New England Pass Deadline - April 30!
I was once told by a college professor that the term "deadline" is derived from an old prison term describing the line at which guards were ordered to shoot prisoners attempting to escape. In other words, not something you want to get real close to. Well we're getting frightfully close to the April 30 deadline for the best deals on New England Passes,
www.sugarloaf.com

Squaw Valley was the first to host this type of pond skimming event and year after year it continues to grow in popularity. Many ski resorts have their go at pond skimming events, but none do it quite like Squaw Valley. Perhaps it is because the men and women at Squaw are a little more daring, a little more agile, and a little bit better on sticks. Or maybe, it’s because the Cushing Crossing is held on a real pond, rather than a tarp-lined ditch or kiddie pool. 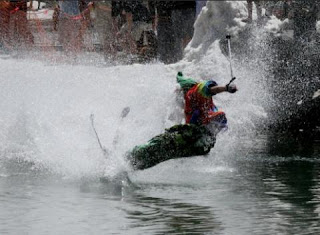 Photo: Squaw Valley - Looks like one of the "Team Tye Dye" crew about to take a bath

Prizes are awarded in five divisions – men’s and women’s ski and snowboard divisions and the fifth, and often most amusing, the unlimited division. This last group of participants has been known to attempt the Cushing Crossing on beach chairs, old snowmobiles without engines and even a chair lift affixed to three snowboards.

Judging is based on style, grace, creativity, and of course, successfully crossing the lake.

KT-22, Granite Chief OPEN get it while you can ! Alex Remembered
www.squaw.com


***
Sierra Summit - Ca
FINAL WEEK TO SKI AND SAVE! This Saturday and Sunday, April 26 and 27th will be our final days of operation at Sierra Summit for the winter season. Thanks to all our guests who visited this year and helped to make this anniversary year a special one. So, don’t put your skis away just yet. Join us this weekend for some terrific spring skiing and riding and … bring your sunscreen. We will be open Saturday and Sunday from 9 to 4 with four chairlifts operating.

There are only SEVEN days left to save on a season pass for the 2008/2009 season. After April 30th, passes prices will not be this low again. Gift cards are available for season passes and can be purchased by phone, on-line, at Guest Services and our Fresno Sport Shop. The shop is located at Blackstone and Herndon and will be open daily from 10am to 6pm through the end of the pass sale on April 30th

Although snow was slow to come in the beginning of the 2007-08 ski season, Colorado’s 26 member resorts saw a near perfect December as fresh snow fell 30 of 31 days in ski country. By the end of January, ceaseless snow storms left measurable amounts of snow 59 out of 62 days across the state, marking two of the best snow months on record at many resorts.

Powderhorn reported record December snowfall. December and January were record snowfall months at Aspen/Snowmass and Vail, and Telluride received record snowfall December through February. January and February snowfall totals were among the highest in Loveland’s history, and 2007-08 marked the first time Steamboat surpassed the 100-inch cumulative mark three months in one season (Dec.-Feb.).

As of today, Colorado’s 26 member resorts have received 141 days of measurable snowfall and tallied 105 powder days (calculated as at least one resort receiving five or more inches of new snow).

OPEN THIS WEEKEND
Aspen Highlands, Silverton, and Wolf Creek for the final time this season, as they end winter operations on Sunday. Arapahoe Basin, Echo Mountain, and Loveland remain open for winter operations. A complete list of closing dates can be found at ColoradoSki.com. 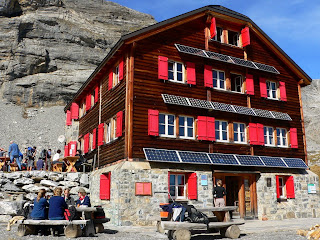