Our mountain op's team has been hard at work over the past few days and nights! Snowmaking expands Thursday evening over Bear Mountain, Skye Peak, Snowdon, North Ridge and Pico. Flurries are expected for this evening and tomorrow is looking to be a fantastic January, winter day with partly cloudy skies and temperatures in the mid 30's. Kick off the weekend a little early and come enjoy the most available open terrain in the East!
Our grooming fleet will be busy tonight laying miles and miles of corduroy on 74 trails for Friday.
President’s Weekend Package Arrive Friday night of the holiday weekend for a three-night/three3-day package including lodging and lift ticket starting at $132 per person per night. Package must be booked at least 48 hours before arrival. Available February 17-19, 2006. Call 800-621-MTNS or visit www.killington.com.
Killington

STEAMBOAT SPRINGS, CO—January 19, 2006—With more than 22 feet of snow this winter, Steamboat has reached another snow milestone, recording a three-wire winter, when the snow stacks up past the third row of fence wires. Yampa Valley ranchers have traditionally measured the severity of a Routt County winter by how high the snow stacks up against their four fence wires. "Clearly, Steamboat has the best and most snow in the Rocky Mountains with a mid-mountain base that rivals some summit bases," said Andy Wirth, vice president of sales & marketing for Steamboat Ski & Resort Corporation. "With our snowiest November on record, over 100 inches in December and our snowiest January in the past four years, Steamboat is definitely showing why it is the home of Champagne Powder snow."
This season, snow has surpassed the third row of fence wires across the Yampa Valley and is fast approaching the fourth. As Sureva Towler writes in her book, The History of Skiing at Steamboat Springs, "By January or February of a typical winter, snow will cover the third fence wire, usually 30 inches high." Four-wire winters, generally more than 350 inches at the resort’s mid-mountain location, were recorded in 1983-84, 1989-90, 1992-93, 1995-96, 1996-97 and 1999-2000.
As of 5am, five inches has fallen overnight at mid-mountain and nine inches at the summit in a 24-hour period. In the past four days, 25 inches (2.08 feet) has fallen at mid-mountain and the summit. Since the resort opened on November 23rd, snow has fallen 38 out of 58 days (65.5%) with 23 of those days recording four or more inches. So far this season at mid-mountain, Steamboat has seen 15" in October; 83" in November (a new monthly record); 105" in December (5th time 100" has fallen during month); and already 65" in January (most in past four years) for a combined total of 268" (22.33 feet).

***
Big Sky
Over a foot and a half of powder and enjoy the ideal conditions
See web site for special Discount 48.00 lift ticket ( Restrictions apply ) 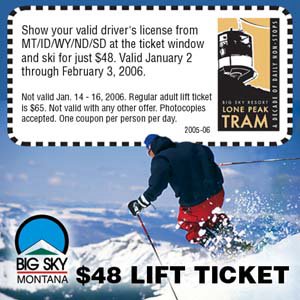 
***
It's National Safety Awareness Week and resorts are offering special incentives for those who ski safely, and buy helmets or get their bindings checked, for example. Meanwhile, Travelocity is offering a multi-pass deal for skiers who would like to ski at multiple mountains. The Olympics will be underway soon and ski events leading to the Olympics continue. Check with your favorite resort for special events and discounts if offered.

***
USSA News
HAHNENKAMM WEEKEND SET TO OPEN WITH NEW SNOW Daron Rahlves set downhill victory on the 2006 goal list
KITZBUEHEL, Austria (Jan. 19) - A snowstorm that dropped upwards of three feet of snow on The Streif, the fabled Hahnenkamm downhill course, erased two days of training as the Super Bowl of ski racing neared. Organizers planned to go ahead Friday with the super G.
“Oh, training is overrated,” U.S. Men’s Head Coach Phil McNichol laughed Thursday night. He quickly added, “Seriously, of course, it’s always better to get more training on this hill. It’s gnarly and you want your athletes to be prepared.” One training run is not optimal, but it’s the cards we have to play this time.”
OLN will televised race coverage Sunday at 5 p.m. ET as part of its ongoing 10 Weeks to Torino pre-Olympic coverage.
The schedule for Hahnenkamm’s 66th race weekend includes a super G Friday, the downhill Saturday and a slalom - with a combined calculation from the DH - on Sunday. The races are the final speed events before the U.S. Olympic Team is named next Wednesday during the Snowsport Industries America trade show in Las Vegas.
One of the central figures this week in Kitzbuehel has been Daron Rahlves (Sugar Bowl, CA), who has won two Hahnenkamm races. He captured the 2003 Hahnenkamm DH and the 2004 super G. And he listed winning the Hahnenkamm DH again as one of his goals this season.
Rahlves has won three downhills this winter - at the VISA Birds of Prey races at Beaver Creek, Colo., and then Bormio, Italy, after Christmas and the Lauberhorn DH last week in Wengen, Switzerland. He was fourth in the lone training run Tuesday on The Streif.
The U.S. Ski Team will start Rahlves and five others Friday in the super G: defending World Cup leader Bode Miller (Bretton Woods, NH), JJ Johnson (Park City, UT), Scott Macartney (Redmond, WA), Steve Nyman (Orem, UT) and Marco Sullivan (Squaw Valley, WA).
“We’ve had two nice days of powder skiing,” said Sullivan, a 2002 Olympian Sullivan, who is looking to rebound from two years on the sidelines with knee injuries to make his second Olympic Team. Sullivan was 16th last weekend in the Lauberhorn DH.
“I got my first decent result last week and I’m feeling confident again. I’m looking for some good skiing here. It’s a sweet course,” Sullivan said.
“It’s been a little crazy,” added DH/SG Coach “Johno” McBride. “I set the [super G] course, so hopefully the boys’ skiing will reflect some good coaching.”
The soft snow, on top of a totally injected DH run, should make for some tricky conditions, especially if the temperature climbs into the 40s over the weekend, as predicted. “There’ll be places where the surface is very good and places where it’s less than ideal,” McBride said.
“It will be interesting to how inspection - with all the sliding that goes on - buffs things out a little more. If it gets to 50 - and they’re calling for maybe plus-10 Centigrade, it will have quite an effect, I’d think. It could be quite a rough ride...and difficult to win from even No. 30 start.
Hahenkamm

***
USSA News
ALPINE (Olympic Team to be named Jan. 25 at SIA show in Las Vegas) Men – Daron Rahlves won the 76th Lauberhorn DH in Wengen, SUI, as a tuneup for this week’s “Super Bowl” at the Hahnenkamm in Kitzbuehel, AUT. The win – his third of the season – tied him with Picabo Street for most DH wins by a U.S. skier (nine). Ted Ligety continued his hot slalom results, grabbing his third podium this season. Women – Kirsten Clark was fourth in a super G at Bad Kleinkirchheim, AUT, and Libby Ludlow finished seventh for the best result of her career. Heading into the final races for Olympic qualifying in St. Moritz, SUI, this weekend, Lindsey Kildow was second in DH points, sixth overall.. CROSS COUNTRY (Olympic Team named Tuesday, Jan. 17) U.S. Championships Jan. 3-10 drew 450-plus skiers; 2002 Olympian Kikkan Randall won three more titles and Kris Freeman took two as final Olympic spots were decided for the 17-member team heading to Torino. Final pre-Olympic camp was set for Seiser Alm, Italy, before final World Cup races Feb. 4-5 in Davos, SUI. DISABLED (Paralympic Teams to be decided in February) Alpine skiers used Huntsman Cup races Jan. 3-5 in Park City, Utah, as strong training runs before World Cup races Jan. 23-28 in South Korea and Jan. 30-Feb. 1 on the 1998 Paralympic course in Nagano, JPN. Cross country skiers were prepping for World Cup races of their own in Norway at month’s end. The Paralympics are March 10-19 in Torino. FREESTYLE (Olympic Team to be named Jan. 25 at Deer Valley Resort) Moguls – After Jeremy Bloom and Hannah Kearney said g’bye to 2005 with U.S. Ski Team Olympic Trials wins Dec. 30 in Steamboat Springs, U.S. moguls skiers had an electrifying Friday the 13th at Deer Valley. Toby Dawson and Michelle Roark each won a World Cup moguls event at the Chevrolet Freestyle International. Final Olympic qualifying opportunities are this weekend with two moguls contests and an aerials event at the Nature Valley Freestyle Cup in Lake Placid. Aerials – Ryan St. Onge and Joe Pack electrified Deer Valley by finishing 1-2 Friday; it was the second World Cup win of the season for St. Onge. If there were any doubt, St. Onge clinched an Olympic berth by winning the Olympic Trials under the lights in Steamboat Springs along with Emily Cook. JUMPING/NORDIC COMBINED (Both Olympic Teams named Monday, Jan. 16) Nordic Combined – Bill Demong kept producing top-10 race results in World Cups. “He just needs to tighten his jumping a bit – and that’s coming – and he’ll be on that podium,” said Coach Lasse Ottesen. U.S. Championship competition is Friday at Steamboat Springs. Jumping – U.S. jumpers are training this week at Utah Olympic Park before heading to Steamboat Springs for nationals Friday and Saturday. SNOWBOARD (Olympic Team to be Named Saturday, Jan. 21 at Mountain Creek) Halfpipe – Shaun White and Gretchen Bleiler each grabbed another halfpipe win at Mt. Bachelor during the second stop of the Chevrolet U.S. snowboard Grand Prix. Mason Aguirre finished second for the second time in a row while Danny Davis posted his second-straight third place. Hannah Teter placed second for her second ’06 Grand Prix podium and Elena Hight posted podium no. 3. The Grand Prix culminates in Mountain Creek, N.J., with two halfpipe contests Jan. 20 and 21 and the Olympic Team announcement. Snowboardcross – Americans continued to grab podiums on the World Cup including Jason Smith, who won the SBX in Kronplatz, Italy, Saturday with Jayson Hale placing third. Alpine – Rosey Fletcher captured her first podium of the season and the 20th World Cup podium of her career Jan. 8 in Austria. US Ski & Snowboard Teams