Killington
AMERICAN OLYMPIANS HIGHLIGHT FIELD AT SPRINT U.S. FREESTYLE CHAMPIONSHIPS MARCH 23-26 AT KILLINGTON KILLINGTON, Vt. (March 20) – Killington Resort showcases America’s best freestyle athletes including U.S. Olympians appearing in their first domestic competition since the Games at the 2006 Sprint U.S. Freestyle Championships March 23-26 at Bear Mountain. 2006 Olympians including moguls skiers Travis Cabral, Michelle Roarke and Hannah Kearney, along with aerialists Eric Bergoust, Emily Cook and Jana Lindsey are just a few of the athletes scheduled to compete.
OLN will broadcast the 2006 Sprint U.S. Freestyle Championships on Saturday, April 1 at 3:30 p.m. ET and again on April 4 at 4 p.m. ET. The U.S. Championships match the best U.S. Team athletes with hundreds of aspiring American skiers looking to measure themselves against world-class athletes as they aim for spots on the U.S. Ski Team. Last year, Worlds champion Nate Roberts dazzled hometown fans en route to two U.S. titles in moguls and duals in Park City, Utah. Also defending their U.S. titles are 2006 Olympians Jillian Vogtli (moguls) and Ryan St. Onge (aerials). In addition, moguls bronze medalist Toby Dawson, who is not scheduled to compete, will come to Bear Mountain to meet his fans.
Moguls and aerials athletes will compete on side-by-side courses for the first time ever at a national championship event with both venues located on Killington’s Outer Limits Trail – the longest, steepest moguls run in the East. All events are free and spectators can view events from the deck of the Bear Mountain Lodge. Meanwhile, Killington’s 430-foot long superpipe, featuring 18-foot walls and located a short walk from the Bear Mountain Lodge, will host the inaugural U.S. halfpipe championships.
Competition kicks off with halfpipe competition on Thursday, March 23. Skiers will compete in two runs for the opportunity to be crowned the first-ever U.S. halfpipe champion. On Friday, Roberts will defend his national moguls title. Saturday, the aerials competition will feature several recent Olympians including 1998 gold medalist and four-time Olympian Bergoust, four-time World Cup winner St. Onge and Cook, who recently grabbed her first podium in five years at World Cup Finals. Sunday’s dual moguls competition features skiers going head-to-head in a single-elimination format to determine the national champion. 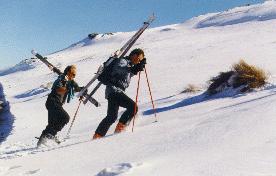 ***
Zermatt
Off-piste skiing (Excursion) Skiers don't have to content themselves with just skiing on the pistes! We will guide you down slopes in their natural state to isolated valleys. If we have sufficient participants we offer these guided tours for groups at the price of CHF 165.- / EUR 110.- per person. For information and reservations contact the "Alpin Center", Mountain Guides' Office, tel. 027 966 24 60 Alpin Center (8F / 111) Guided Village Tour (Diverse) Time: 16:00 - 17:00 Learn about Zermatt past and present on a tour of the village with Mrs Edith Villiger-Imark. Minimum 4 people. No reservation necessary. Free of charge Tourismusbüro, Bahnhofplatz (6G / 103) <
Zermatt

***
Valle Nevado Ski June, July, August, September and October 2006. Just 35 miles from Santiago's International airport, Valle Nevado ski resort is in the heart of the Andes offering more than twenty-three thousand acres of skiable terrain. Host to the World Cup of Snowboard again last year, packs all of the mountain, services and comforts you are accustomed to with high-speed detachable chairlift, a ski shop full of carving skis, top notch ski-pros that speak a dozen languages, helicopter skiing / riding, South America's only Super Half-Pipe, and access to three mountains back to back to back. NEW HELICOPTERS FOR HELISKIING AND TRANSFERS: Because of the unbeatable conditions offered by Valle Nevado for heliskiing, we are consolidating a rapidly growing trend that has attracted more and more specialized powder skiers from all over the world. The incorporation of a modern AS350 B3 helicopter, property of Ecocopter, Hill allow for ascensions up to 4,200M (13,780 ft.) peaks to enjoy up to 7000M (22,965 ft.) of skiing in a day with a minimum run of 1000M (3,280 ft.) The 2005 season offers several alternatives for those wishing to try the exclusive heliskiing experience. Either on skis or on a snowboard, the mountain guide will take you to slopes that accommodate the skill level of those wishing to learn this exciting alternative. We also have different alternatives for those wishing to improve technique or get the most out of one of the most exhilarating experiences in sports. Additionally, we have also incorporated an EC130 B4, also belonging to Ecocopter, with a capacity for 6 passengers. This second helicopter, as sophisticated as the one before mentioned, will be used to transport guests between the city/airport and Valle Nevado. Chilean Ski Tours Chilean Ski tours

***
Iceland Park Project
Since its conception in the summer of 2001 the Iceland Park Project’s impact has been phenomenal. Our inaugural camp in 2002 came out of nowhere on a shoestring budget and received more media coverage than any other European camp and since then IPP has gone from strength to strength especially with the help of our sponsor Nikita who have facilitated a huge improvement in our facilities. Run by three head shapers hailing from the legendary SPC55 Camps in Austria, IPP has proven it can deliver what it set out to do - namely to build a top quality park in a spectacular landscape, create a relaxed atmosphere where pros and guests ride together and to supply the snowboard media with unique and spectacular images. The following list of coverage is testament to just that. The 2005-06 winter is upon us and already IPP is featuring heavily in magazines and films around the world. The park itself is situated near to the top of the Snaefelles Glacier, reputed to be one of the seven ‘energy centres’ of the world!. A normal day up the hill at IPP involves a twenty minute van ride up the dirt road to the snowline. From there, depending on snow conditions, it is a five to ten minute hike or a short cat ride or sled tow to the main park area. Once in the park it’s a full hiking experience and as the park is never crowded this adds to the chilled and all-together atmosphere that IPP is all about
Iceland Park