LAKE LOUISE MOUNTAIN RESORT - Calgary, AB Canada
2006/7 Beating Out All Previous Epic Winters –
Calgary, AB – January 10, 2007 – Lake Louise Mountain Resort has received more snow, generated a deeper snowpack, and opened more terrain earlier than any previous year on record, making 2006/7 the best year to date.
The Resort surpassed the 3 metre (10 foot) mark for accumulated snowfall on January 6th, which is the earliest in 38 years of record keeping. This was two days ahead of the epic season of 98-99, which had previously been the benchmark ‘best snow year’…until this year. As of January 10, Lake Louise has had 3.28 metres (11 feet) of accumulated snowfall, as measured at the treeline, which is 168% above average for this time of year. The resort received 20cm (8 inches) overnight last night and 44cm (17 inches) in the past week. All lifts and 139 of 139 runs are open.
Says Matt Mosteller, Senior Director of Business Development for the world-famous Resort, “There’s no better place to be right now than the Canadian Rockies for an incredible skiing and riding experience. The conditions have been terrific since our opening day in November, but the continued record snowfall has taken the Lake Louise experience to a whole new level. People are enjoying some of the best ski days of their life right now.”
Visitor Daniel Hobachi, of Toronto, Ontario (pictured below), enjoyed the champagne powder on Tuesday and said, “I’ve been snowboarding for 10 years and have traveled around the world looking for the Ultimate Ride. The snow at Lake Louise blew my mind and is by far some of the best I’ve experienced. Beautiful scenery, challenging terrain and wonderful people – What more could anyone ask for?” 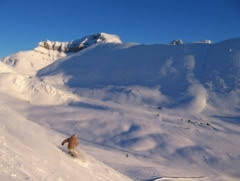 2007 started where 2006 left off, with lots of powder! We have received more than 70cm of snow since New Year's Day. Conditions are fantastic; with soft snow on Panorama's famous groomed cruisers and deep powder lines in Taynton Bowl

Is your New Year's resolution to spend more time with friends and family? Well, here's a deal for you! Stay in our slopeside, silver level lodging from just $84* per person, per night - this includes your lift tickets and access to Canada's biggest and best slopeside hot pools! Call 1 800 663 2929 and take a break.

What’s Happening at Crystal Mountain: Mother Nature has been good to us so far this year! I cannot believe all the snow so far this season- our annual snowfall average is 350 inches, and we are almost there with 285inches under our belt!!! What a winter! You gotta make your plans to come and visit the slopes...the deep snow is calling your name! Please ski/ride with a partner for safety.

Saab/Salomon X-Wing Rally January 27th Participate in the most exciting all mountain event for a chance to win a trip to Europe for the ultimate ski adventure. Please see website for more info. Register at www.xwingrally.com.

PARK CITY, Utah (Jan. 9) - The best freestyle skiers in the world return to Deer Valley Resort this week for the Chevrolet Freestyle International that will present four World Cup competitions over three days on the 2002 Olympic venue.
Warm weather elsewhere resulted in a slew of cancellations and forced a six-week postponement of the World Championships in Italy (to March 8-11), and brought an extra event to Deer Valley. The resort, which picked up an aerials event from Lake Placid, NY, will have three nights of competition plus an afternoon of moguls skiing. The schedule:
Thursday - Moguls in the afternoon (finals begin at 1:20 p.m. MT), aerials (from Lake Placid) at night (finals begin at 8:15 p.m.) Friday - Aerials at night (finals begin at 6:30 p.m.) Saturday - Dual moguls at night (finals begin at 5:45 p.m.)
U.S. athletes traditionally have done well at Deer Valley. A year ago, Ryan St. Onge (Steamboat Springs, CO) and local favorite Joe Pack went 1-2 in an aerials event while Toby Dawson (Vail, CO) and Michelle Roark (Winter Park, CO) won the moguls event to clinch their spots on the Olympic Team. Dawson went on to become moguls bronze medalist - and they all point to the enthusiasm and rabid support of the Park City faithful.
This season, St. Onge won the opening World Cup aerials meet of the season last month in China while Shannon Bahrke (Tahoe City, CA) - who was silver medalist at the 2002 Olympics at Deer Valley - won the season-opening World Cup moguls event last Saturday. Former World Cup aerials champ Jeret "Speedy" Peterson (Boise, ID) caught his first podium of the season Sunday in Quebec.
The two sites at Deer Valley - the steep, moguls run on Champion and the aerials kickers and landing hill on White Owl - have been worked on for a month with crews firing up snowmaking machinery to supplement the generous natural snowfall this winter.
"They've been at it every day and into the night," said Calum Clark, events manager for the U.S. Ski and Snowboard Association, which oversees the competitions. "By the time we get to the actual contests starting Thursday, Deer Valley's crew will included nearly 20 workers to build and maintain the jumps and landing hill for the aerials and another 25-man crew to build the "air" jumps and hand-shape the moguls on Champion. "They'll have more than 1,800 man hours on the aerials jumps and the same amount of time for the moguls course," Clark said. In addition, some 4,000 feet of safety fencing line both sides of the moguls in double layers to ensure safety.
http://www.usskiteam.com


***
2007 Winter X Games XIJanuary 25-28 2007
Aspen, Colorado
The 11th annual, free-to-the-public, winter action sports competition features more than 230 athletes from across the globe competing for medals and prize money in the following sports: Moto X, Ski, Snowboard, and Snowmobile.
GEM returns as the Sport Organizers for all of the skiing events once again, which will include Skier-X, Slopestyle, Superpipe. Duties include course design, athlete selection and competition execution. GEM will also be assiting with the Boarder-X competitions
www.globaleventmanagement.com

Sun Peaks Resort invites you and your family to participate in the Sun Peaks Family Cup this coming Sunday, January 14, 2007.
Designed for fun and participation, this event features a point competition between countries. It is a great event to challenge members of the family or friends from around the world. The Family Cup is available to all family members and anyone who skis or rides. Any competitor from any country is able to compete with age groups starting at 4 years through 19 years for students then the open adults division for all competitors of any age above 19.
The Australian side has come to Sun Peaks in force to take the Cup. It will be up to Canadians, Brits, Americans, and others to represent their country.


***
Mt. Bachelor to Host Snowboard Grand Prix
MT. BACHELOR, Ore. (Jan. 9) - For the 10th year, Mt. Bachelor will host a U.S. Snowboarding event as the second stop of the Chevrolet U.S. Snowboard Grand Prix will be relocated to the Oregon resort.
Previously slated for Mountain Creek, NJ, organizers were forced to move the event due to unseasonable temperatures throughout the east coast. Mt. Bachelor will pick up both the halfpipe competition and the Paul Mitchell Progression Session slopestyle on Feb. 3-4, the originally scheduled dates of competition.
"It was difficult to move from Mountain Creek, because they've been such a solid Grand Prix venue, but if somebody has to step up, we're fortunate it was Mt. Bachelor," said Grand Prix Director Eric Webster. "Both the halfpipe and slopestyle are consistently world class and super spectator friendly, plus they've had excellent snowfall. Mt. Bachelor has hosted outstanding Grand Prix events in the past and I'm sure they will deliver a quality event in February."
In addition, Mt. Bachelor will host the Chevrolet Revolution Tour just one week after the Grand Prix, which will create a full week of snowboarding, showcasing both the elite riders and the up and coming riders in the U.S. added Webster.
"Mt. Bachelor is pleased to welcome the Grand Prix back to our resort," comments Mt. Bachelor President Dan Rutherford. "The caliber of the snowboard athletes this event attracts is bar none and we are honored to have them as competitors and guests. Every year the Grand Prix proves to be an exciting addition to our event line up. We are confident this year will be no exception." For complete details on the Chevrolet U.S. Snowboard Grand Prix tour, log on to
www.ussnowboarding.com/grandprix