NBC will televise coverage Saturday at 2:30 p.m. ET and OLN will have coverage Sunday at 5 p.m. ET as part of its weekly 10 Weeks to Torino series of major event coverage as a lead-up to the February Olympics in Italy.

Photos are available at: USSA Gallery

Olympic Comittee Photo
On day 22 of the Torino 2006 Olympic Torch Relay, the Olympic flame has reached the city of Naples. Tomorrow, the Olympic flame will continue its journey by travelling to the town of Frosinone. The XX Olympic Winter Games –...
TORINO 2006: The Olympic Flame arrives in Palermo The Olympic flame yesterday arrived in the town of Palermo, where it will stay until 26 December. It will then continue its journey, visiting the town of Catania on Boxing Day. This is the 16th day of the Torino 2006 Olympic Torch...
World Cup nordic skiing results
03/01/2006 Skiing FIS Nordic Combined World Cup Ruhpolding Germany (GER )
Olympic Organization

VII Olympic Winter Games
The 1956 Winter Olympics, held in Cortina d’Ampezzo, Italy, were most notable for the first appearance by a team from the USSR. The Soviets immediately won more medals than any other nation. Their speed skaters won three of the four events, while their ice hockey team ended Canada’s domination. Pavel Kolchin became the first non-Scandinavian to earn a medal in cross-country skiing. Anton Sailer won all three men’s races in Alpine skiing - the first clean sweep in Olympic history. Madeleine Berthod celebrated her birthday by winning the downhill by an amazing 4.7 seconds. The United States began to emerge as a definite power in figure skating as Tenley Albright won the women’s title and Hayes Alan Jenkins led an American medal sweep on the men’s side. The Cortina Games were the first to be televised and the last at which the figure skating competitions were held outdoors.
32 NOCs (Nations), 821 athletes (134 women, 687 men), 24 events
From Olympic Organization Comitte Archives 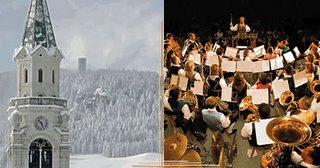 Cross-country ski ,The 5th February 2006 Cross-country skiing international competition "GranFondo Dobbiaco-Cortina" Part of the race is along the old Dolomite railway track.(42km)
Adrenalin
Taxi-bob, Snowrafting, crazy Sledge, Extreme skiing
Bobsleigh races
The "Eugenio Monti" Bobtrack, considered to be one of the most technical and beautiful track in the Bobsleigh world circuit, will host:

***
BEST WISHES for Your New Year!
Input ( Spotters) for your local resort are wanted, with photos, clear if reduced to 250 pix sw

Annie, have fun! and , Keep your eyes in the Fall Line in front of you, try not getting to distracted too much, ...by external issues.
You rip girl , .... I hope to see you in the Xtreme Mountain finals. Rip two lines three times and have "The Devil" time you. You have a great coach and Dad on your side. ...Sail with the Bird, Lydia would be Proud with what you've accomplished and your direction ! ! ! .