***
Mammoth Mountain
The sun is shining bright over the mountain this morning with calm winds. We can grab a lighter coat today with afternoon highs expected in the upper 40s. All lifts will be in operation with the exception of Chairs 7, 20 and 26. We'll be riding on an awesome 14-16 foot base of packed powder and machine groomed snow. 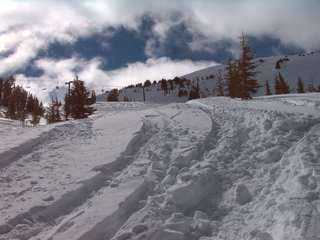 ***
Whistler Blackcomb
Today: Periods of snow becoming mixed with rain this afternoon. Alpine high +1. Snowfall 5-10cm. Wet and windy conditions with a cooling trend are expected through to Monday.
Event

Free Avalanche Awareness Tours Free Avalanche Awareness Tours are jointly run by the Whistler Blackcomb Ski Patrol and the Whistler Sports Injury Prevention Program. The full day tour covers terrain evaluation, avalanche phenomenon, procedures that Whistler Blackcomb uses to keep people safe inside the ski area boundary, avalanche safety equipment, and rescue techniques. You must be able to ski/ride a blue run (intermediate run) comfortably to join the tours. Please register in advance through the Blackcomb Daylodge Guest Relations desk or call 604.938.7759. Please note: a $10 cash refundable deposit will be taken when you sign up. On the day of your tour, meet your Ski Patrol guide and group between 8:45am and 9am at the Blackcomb Daylodge.
Whistler Blackcomb

The NorAm Finals, which is being held for the first time in Washington state, includes seven Olympians and other elite-level riders vying for a chance to represent their countries in world competition in the coming year. Canada’s Alexa Loo, Philippe Berube and Ross Rebagliati round-out the Olympians who will carve at Crystal this weekend. "Seattle is a gracious host and the NBA experience is amazing,” said Fletcher, a three-time Olympian who will be competing in what is expected to be the final elite level race of her career. “The U.S. team is very excited to be here,” she said. “The field looks great – there are past Olympians, current Olympians and juniors competing. It should make for some exciting racing.” Nor Am Finals