CONSIDERABLE AVALANCHE WARNINGS !
Two instability concerns exist for the snowpack today based on elevation. Above 7,500', heavy, wet snow is combining with strong ridgetop winds to create wind slabs on NW-NE-SE aspects. These slabs have the potential to become very cohesive due to the wet nature of the new snow from overnight.
From
Sierra Avalanche Center 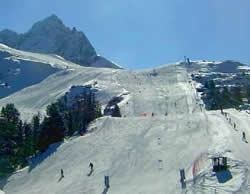 ***
Sun Peaks
New Snow: 0cm Mountain Base: 174cm/68.5in Village: -4C/25F Mid Mountain: -8C/17F Top: -7C/19F Sky: Cloudy Runs Open: 117/117 Today’s Forecast: A mix of sun and cloud. Isolated flurries. High plus 4. Winds variable 10 to 15 km/h. Extended Outlook: Wednesday and Thursday. On Wednesday a mix of sun and cloud is with just a slight chance of flurries as the trough weakens. A disturbance moving in from the coast looks it will bring more clouds and flurries to the area on Thursday. Today’s Report: Good morning! This is Abominable ‘A’ with your Sun Peaks Snow Report for Monday April 3, 2006 @ 6:00am We had no new snow overnight. But flurries are expected today and later through the week. The base is weighing in at 174cm and thanks to our AMAZING groomers there are still plenty of sweet turns to be had.
The temperature is currently -4C in the Village, at Mid-mountain -8C, and -7C at the Top of the World. The winds are light, and the sky is cloudy. Today we’re expecting a mix of sun and cloud. Isolated flurries. High plus 4. Sun Peaks

What's Happening at Crystal Mountain: Sorry about the tardiness of this report but we have gotten a lot of snow just this morning and the conditions are going to be remarkable out there with fresh snow covering the entire mountain. The big April Fool's Joke of the day is going to be on everyone who did not come out and join us today! Another amazing fresh powdery day and it is the first of April...be careful not to blink because with only 15 more days left open this season time is flying by and if you are not weary you may miss your chance to come and experience some of the best Spring (even though it looks more like Winter still!) conditions that we have seen in years! Check out the website to see all the great events that we have coming in April! April 1- Citizens Downhill Competition April 2- Military Appreciation Day April 8- Poker Run April 15- Snow Golf April 16- Easter Sunrise Service April 16- Dummy Downhill
Crystal


***
Whistler, BC
WHISTLER'S BIGGEST FESTIVAL STAGES RAIL EVENT IN VANCOUVER --Preview of the TELUS World Ski & Snowboard Festival will go off at the Library Square Session on April 8-- Whistler, BC - April 1, 2006 - Come get pumped about this year's TELUS World Ski & Snowboard Festival watching some of Whistler's best riders and skiers throw down a barrage of the latest tricks in a free-flowing, jam-format rail session on Saturday, April 8, from 7:30-9:00pm in Vancouver's Library Square. The Festival is bringing the mountain to the city, to give Vancouver a taste of the legendary 10-day celebration fusing music, arts and sports that will rock Whistler this year from April 14-23.

An impressive 20-foot, double rail and ledge will be constructed, with snow specially transported into downtown Vancouver for the landing zone. The action will take place in the North Plaza of Vancouver's Library Square, located at the corner of Georgia and Homer Street. DJ Muchi Mambo will lay
down the soundtrack as pro athletes including Logan Short, Geoff Brown, Dennis Bannock, Jeff Pepperdine, Jesse Fox, Johnny Lyall and many more, create a fast paced, dynamic assault on the senses, with some unbelievable jibs and tricks.
Whistler 2006