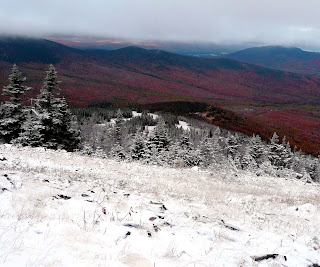 The first snow of the 2007-08 winter season fell at Sugarloaf Saturday night. Elevations above 2500 feet received approximately 2 inches of snow blanketing the trees and ground. Temperatures at the summit fell into the mid to high 20s overnight and was 28 degrees at 10 am Sunday.
Sugarloaf’s 4,237 foot elevation results in winter arriving early. Sugarloaf snowmakers intend to make the most of it’s elevation advantage by making snow as soon as the weather presents the opportunity.

This season Sugarloaf has embarked upon the largest capital improvement campaign in more than a decade by investing more than $4 million in the resort to make New England ’s premiere mountain experience even better. We’ve boosted snowmaking by 20 percent, added new groomers, expanded Bullwinkles, renovated the Sugarloaf Mountain Hotel, and more than doubled the size of the Sugarloaf Outdoor Center .
www.sugarloaf.com


***
Mad River Glen
The historic restoration of the Single Chair is starting to coalesce. It will be completed and load testing performed around the first of November. Well in time for the start of the ski season!
Triple Major Pass The new Triple Major Pass offers college skiers unlimited access to Jay Peak Resort, Bolton Valley and Mad River Glen for $269. Added to the course schedule for the 2007-2008 season is Mad River Glen, which teams up with Double Major upper classmen Jay Peak Resort and Bolton Valley Resort, to offer unlimited access to all three ski areas, all winter, for only $269. There are no restrictions at any of the mountainss, and the pass includes night skiing and riding at Bolton Valley Resort until 9pm. The pass price increases to $329 after Nov. 5th
www.madriverglen.com

A brief selection of some of the events from the end of August until the end of October 2007:
25.-27.10.07 International Rallye in Valais


October 14
The Writing Life
Leading authors talk candidly about the challenges, frustrations and rewards of being a writer.

In the Blood
All families have stories. Four masters delve into the roots of family dynamics to recall stories that encompass the ritual patterns of years or even generations.

Music
October 3 and 10
Midweek Medley
Concerts feature a range of music - from the classics of the great masters to the exciting works of modern composers.

***
Big White
It's SNOWING at Big White and Silver Star! Staff and residents woke up this morning to a nice frosting of about five centimetres on the chairlifts, buildings, and on the ski runs. The Snow Ghost newsletter will now commence its regular weekly schedule of events, deals, and look for it every Thursday from now through mid-April!

Whether you're a vacationer or a season passholder to Big White and Silver Star, we invite your feedback. If, during the season, you have any comments about our operations at Big White, feel free to contact either Blair Ireland, Guest Services Manager, or Jay Hayashi, General Manager

LOST AND FOUND is the story of the extraordinary season of 2007 as seen through the eyes of world-class skiers and snowboarders. With global drought persisting and ski resorts closing around the world, athletes are forced to follow the snow, sending them deep into the uncharted north country of Alaska and Canada. Filmed almost entirely in North America, LOST AND FOUND is a testament to the terrain and conditions that only exist in the Western Hemisphere. This film will take you into the vast, unexplored Tordrillo Mountains of Alaska, proving that some of the best big mountain riding in the world is still completely undiscovered. Athletes take advantage of the bountiful winter in British Columbia, hit disturbing park features in Aspen and score over-the-head powder pillows at Skeena Heliskiing. The winter of 2007 was feast or famine; LOST AND FOUND documents the feast.

Olympic Village Lodge in Squaw Valley
October 20, 2007
"Lost and Found"
Join the crew and athletes from Teton Gravity Research at the Olympic Village Lodge in Squaw Valley for the North Shore premier of their latest ski and snowboard film "Lost and Found". Doors open at 6:30 pm. Film starts at 7:30 pm. After party at Zenbu featuring live music
www.squaw.com
www.tetongravity.com/