***
New Hampshire
We are about halfway through the 2005-06 season. December's weather gave us a great start to the season and January's weather challenges have kept snowmakers and groomers on their toes. Fortunately, this week's forecast calls for cold nights, and some small storms to help refresh the slopes. Over the past few years February and March have been when we've received the most snowfall. Keep the faith and hopefully we get crushed with snow over the next several weeks!
Super Bowl Weekend
Believe it or not we won't be watching the Patriots win another Super Bowl this weekend! The good news is that traditionally Super Bowl weekend keeps alot of fair weather skier and riders home, which means fewer people at your favorite NH downhill and XC areas. The game doesn't start until after 6pm on Sunday, so it seems silly to bag the whole weekend. Along with the Super Bowl comes specials at several ski areas, and parties scheduled through the weekend in honor of the game. Check out the link to our deals and events planned for the weekend!
With the 2006 Winter Olympics in Torino just around the corner, it's time to do your homework on local talent that will be going for the gold. Among the NH athletes headed to Italy are the US's top hopes for gold in both cross country and downhill events. Kris Freeman from Andover, NH leads the cross country squad's efforts. On the alpine side we have that guy Bode Miller who isn't too bad either. Ski new Hampshire

***
Wildcat
Pinkham Notch, NH ? It has been snowing at Wildcat Mountain and the mountain is now back to 90% open. Wildcat received 5-8 inches from Sunday night's storm, another 1-2 inches overnight on Monday, and continuing light flurries into Tuesday. In fact, the forecast calls for a chance of snow every day this week. This adds to the 7-10 inches of snow Wildcat received last week.
and has the cumulative effect of rapidly improving conditions for skiing & riding. On Monday Wildcat opened 15 trails, and so is now open for skiing & riding on 41 of Wildcat's 47 trails. The conditions are powder and packed powder, with variable and thin cover areas on the all-natural snow trails. Grooming is on about 75% of the open terrain, and Mountain sources report that Wildcat has been receiving very positive feedback from skiers and riders on trail grooming, and the overall skiing "shape" of the mountain all season long.
For Events on the weekend February 4th & 5th Wildcat will be hosting an Apres Ski Party sponsored by Sam Adams on Saturday Feb. 4th. Entertainment will be provided by live DJ Brian Sparhawk, who is known for interacting with customers by playing hilarious games and having plenty of prize giveaways. Wildcat 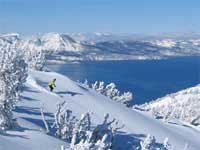 Jackpot Rail Jam Series Feb 10, 2006 | Feb 24, 2006 | Mar 17, 2006 | Mar 31, 2006
Jib your way to big fame and cash prizes at the Jackpot Rail Jam Series. Contests are held Friday evenings from 6pm-8pm (Jan 27, Feb 10, Feb 24, Mar 17, Mar 31) in the High Roller Nightlife park located at the Cal Base Area. Registration begins at 9am the day of the event in the Race Dept at the Cal Lodge and is open to the first 50 applicants. The entry fee is $5. Get yourself to Heavenly, enjoy the show and help the judges decide who gets the cash and who gets the hook
IN california, Heavenly has partnered with Any Mountain Sports & NAC Ski, LLC to provide skiers and riders with an easy and value-oriented way to get from the Bay Area to our slopes for the day. Trips are scheduled for most Saturdays from the beginning of February to the end of the season and depart from select Bay Area Any Mountain Sports stores. Round trip bus fare is just $38 and discounted lift tickets and rental packages are also available. Nac Ski
Heavenly Valley

***
Crystal Mountain
It has been snowing like CRAZY here and it does not look like it wants to let up! We received 2" in the past 24 hours, but because upper mountain was closed yesterday today will be a powder day up top. There is 18" of untracked powder on the upper slopes calling your name!

Date: Tuesday, January 31, 2006 Time: 6:00am Weather: It is calm this morning with overcast skies but we are expecting a big system to move in later today producing large amounts of snow!! Base Temperature: 24 degrees
Base Snow Depth: 94 inches
Base New Snow Fall 24hrs: 2 inches
Base Snow Fall 48hrs: 17 inches

***
Bear Valley
Bear Valley and Dodge Ridge have teamed up once again to offer the 2005-2006 Central Sierra Series (CSS). A dual-mountain Slopestyle competition, skiers and snowboarders alike have a chance to test their skills against the area's best. Bear Valley will host the second event in the series tommorrow, Saturday, January 21st. Registration will be open at the slope-side events shack from 9am-10:30. The competition will kick off at 12pm on the Shady Grove terrain park. Riders must compete in at least 3 of the 4 slopestyle competitions to be eligible for the series title and cash purse (ages 16+), in addition to swag from our sweet sponsors.Lifts & Terrain,2 triple chairs 7 double chairs 1 carpet lift Summit 8,500' 1,900' vertical drop JANUARY 21 CSS Slopestyle #2 - Sports Illustrated Next X Qualifier 28 Bud Light / Gatorade GS Race #3 28 CSS Slopestyle Series #3 @ Dodge Ridge February 5 Superbowl Sunday 10-12 M.A.S. Telemark Festival 11 Bud Light / Gatorade GS Races #4 & #5 25-26 Special Olympics Bear Valley

Snow Depth:
99" @ Upper-Mountain
100" @ Mid-Mountain
Total Snowfall(season to-date):
355" @ Upper-Mountain
310" @ Mid-Mountain
The world is inverted, and I've lost count. Powder days are threatening to outnumber their snowless brethren. 12 inches of heroic possibility this morning, so forget the snooze button. Click on the headlamp, amass your gear, fire up the car, down an extra coffee or two or three, and slot yourself in line. With the bases as high as they've been in recent history, the mountain is primed and waiting. Don't hesitate. This is what we live for.
Jackson Hole