***
Sugarloaf
Sugarloaf has fresh snow on the ground, the skiing and riding is fantastic, and the Olympics are on. It makes for the perfect combination - ski and ride by day, catch the action from Torino by night. Speaking of the Games, a page in Olympic history will be written tomorrow. Snowboard cross will make it's debut in Torino and Sugarloaf's own Seth Wescott will be there wearing our nation's colors. For those who don't know him or haven't seen him in the countless interviews he's done over the past few months, Seth defines what the Olympics are all about - pure athleticism, true passion for his sport, and an unfaltering desire to do his best. In an age when many professional athletes are more concerned about what they take from the team instead of what they contribute, Seth Wescott has become an ambassador to the sport he loves and the face of American snowboarding.
Events
Upcoming Events Feb 17-18 Skeletones - Live at the Widowmaker
Feb 20-25 Maine & Mass February Vacation Week
Feb 27-March 3 NH Vacation Week
March 25-29 U.S. Alpine Championships
Sugarloaf"

***
Sun Peaks
There was 1cm new snow overnight to add to our 160cm base, and we are expecting more snow today. The Groomers have done a wonderful job out there and it’s going to be a great day to be on the hill. The temperature is currently -5C in the Village, at Mid-mountain -9C, and -11C at the Top of the World. Right now the winds are, light, and the sky is overcast. The forecast for today is calling for cloudy skies with periods of snow. All our major lifts are turning today. All 3 mountains are 100% open, with all of our 117 runs ready for you to explore and enjoy. The cross-country network is open. Trails are scheduled to be groomed and track set Today. Sun Peaks

***
Sugar Bowl
Donner Summit, CA – What’s different??? How about $10 Million worth of improvements and a new $46 Lift Ticket – Everyday, Non-Holiday! Get more bang for your buck and rediscover Tahoe’s best value for Big league skiing! 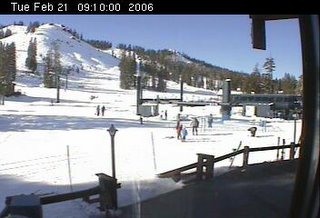 New this year is a 14,000 square foot addition to the Mount Judah Day Lodge with a new bar and restaurant, expanded seating, additional restrooms and a huge granite fireplace surrounded by plenty of space to warm up on those snowy powder days that Donner Summit is known for. As part of the Judah expansion, Sugar Bowl’s added a new on-site Medical Clinic managed by Tahoe Forest Hospital! The resort’s 5th high speed quad will be ready to go on Christmas Tree to service the legendary Race arena, great intermediate terrain and improve the intermountain connection between Mt. Judah and the Village. The new Christmas Tree Express will cut time on the lift by over 50% which means more time finding lines and less time waiting in them! All three projects will be completed and ready for the 2005/06 season

Jayson Hale takes 3rd place at the 2006 Winter X-Games. He is one of Sugar Bowl's sponsored athletes. Make sure you cheer him as he head to the 2006 Winter Olympic Games. At age 19, is the youngest man in the WX '05 SBX field, but that doesn't mean he has less experience. He has been snowboarding since he was 4 and competing since he was 6. Now a member of the 2004 US Snowboard B Team for SBX, he graduated from high school in 2004. In '04 He competed in the World Cup finals in Italy where he was the highest placing American (12th.) At his first Winter X in 2004, he finished 8th in SBX, he missed making the final by less than a few seconds.
Sugar Bowl

Val - New chairlift for 2 persons (1200 p/h) serve as connection between Vallunga and Dantercëppies Easier connection slope from the "Comici" hut on Piz Sella to the "Tramans" - chairlift that continues until Monte Pana. This new slope is an easier alternative to the present connection-slope from Piz Sella over Ciampinoi. Plan de Gralba - New "halfpipe" and "snowrafting" slope We are glad to inform you that the skiing are Val Gardena/Alpe di Siusi will offer the following "Fun" possibilities for snowboarders: Boarder Cross at Passo Sella (chair lift Grohmann-Cavazes); Boarder Cross in the area Comici/Piz Sella (from the middle of January); Natural Half Pipe at the ski lift Sotsaslong; Half Pipe on Alpe di Siusi (chair lift Laurin) Fun Park for children on Alpe di Siusi (chair lift Euro) Half Pipe on Ciampinoi (ski lift Bruno) Val Gardina

***
OLYMPIC NEWSLETTER N°13
Sport is a witness to the practices of our ancestors. And today, the Olympic Games have become their universal language. With its new exhibition, the Olympic Museum seeks to find the roots of sport through the ages, and throughout the world. Upon request, young visitors (from 12 years old) can benefit from tours guided by the Museum’s coordinators, who will have undertaken a rigorous training programme with students from the University of Neuchâtel Ethnological Institute, as part of an exchange: ethnology for some, and sporting values for others. This fusion gave birth to a unique tour programme, of which our young visitors will be the privileged beneficiaries. An educational kit developed in collaboration with the Education and Development Foundation will enable teachers to further explore the themes addressed in the exhibition and, especially, to work on traditional sporting values and compare them with Olympic sports.
Torino 2006 Olympic Winter Games and more exhibition Until 16 April 2006 The exhibition awakes the spirit of the Games in Turin, across three thematic sections that illustrate the most curious and fascinating aspects. Red - passion, yellow - Piedmont and blue - technology and environment. A beautiful journey through the colours of Torino 2006. The week’s events at the Olympic Museum Come and share the passion of the Games! Throughout the XX Olympic Winter Games in Turin, the Olympic Museum will be living to the rhythm of the Piedmont capital, offering a colourful, festive and, of course, sporting programme - free of charge! Every day from 9 a.m. to 6 p.m.: Emotions on giant screens (programme of Winter Games films alternating with broadcasts of the competitions from Turin) Every day from 2 to 5 p.m.: Special Torino 2006 guided tours (included in the cost of the entrance ticket) Wednesday 22, Saturday 25 & Sunday 26 from 2 to 5 p.m.: The winter sports challenge (guided tours, demonstrations and a chance to try ski jumping and curling) Italian menu at the Restaurant du Musée
Sunday 19 February: Visit the exhibition Finding the Roots of Sport. Guided tour for adults run by students from the University of Neuchâtel Ethnological Institute. No doubt that they will be able to share their knowledge and encourage the meeting of sport and ethnology. At 11 a.m. in French. Meet in the entrance hall; admission: ticket price; duration: 1 hour 30 minutes. Information on 021 621 65 11. Opening hours: Monday to Sunday from 9 a.m. to 6 p.m. Museum open exceptionally on Monday 20 February Olympic Organization

***
Squaw Valley
Its been a great week here at Squaw Valley USA with up to 24" of the lightest, driest powder we've seen all year, the type of snow you can use a leaf blower to clear your drive-way instead of a shovel. The cold weather has brought great winter conditions and the weather forecast looks beautiful through next weekend.

This weekend we have big things happening at Squaw Valley, starting with the Jeep King of the Mountain race series, not to be missed! Opening Ceremonies Saturday night include a huge Fireworks Show and a Rail Jam Expo sure to awe the crowd. Go where the action is and we'll see you here!
The Jeep® King of the Mountain Series announces an all-comers National Open Qualifier on Sat. Feb 25th. at Squaw Valley allowing local ski and snowboard racers the opportunity to earn a spot in the Professional Skiing and Snowboarding World Championships on Sunday.

Qualification registration takes place at the VIP Tent at the bottom of Exhibition on Friday February 24th from 12 to 5:00PM. A Mandatory athlete meeting will be held at 6:00PM Friday. Registration is $25.00. Field size is limited to the first 50 Ski or Snowboarders that register. Details and Open Qualifier registration information visit www.jeepsport.com
Squaw Valley got KT

This year the 25th Annual North Lake Tahoe Snow Festival celebration (March 3-12) is back and better than ever. Revitalized in the spirit of Mountain Mardi Gra, the week long celebration is packed with a full calendar of on and off mountain events, parties, live music and shopping & dining specials around the N. Lake Tahoe community. Kick-off the festivities at Squaw Valley for a beautiful torchlight parade and a colorful fireworks show on Friday night. Stick around for the Opening Ceremonies Party at the Olympic Plaza with DJ music from Space Cowboys, DJ Step daddy, Chubby Reign and live music from the Boogie Monsters! More info 530-583-6985. Tahoe Snow Festival