---
AIROLO, Switzerland (March 19) - Jimmy Discoe (Ridgway, CO/Telluride Ski&Snowboard Club), who finished fourth Sunday in moguls, stepped onto the podium today with silver in dual moguls with 2007 World Cup Rookie of the Year Jay Bowman-Kirigin (Salt Lake City/Wasatch Freestyle/U.S. B Team) bronze as the 2007 FIS Freestyle Junior World Championships came to a close.
Americans garnered nine medals in Switzerland (six moguls, two halfpipe, one aerials) to capture the Holder Cup for the overall top nation.
"What a great weekend for the Team," said moguls Head Coach Scott Rawles, "they especially stepped it up today. Yesterday was a long day (in which the team took four medals), we didn't get back to the hotel until around 10 p.m. last night, so for the Team to do such a quick turn around to fire up for today was awesome."
Discoe, who was fourth Sunday behind older brother Joe in moguls, captured his first Junior Worlds medal, while Bowman-Kirigin rung up his career fourth, flipping his results from 2006 where he took silver in duals and bronze in moguls from Krasnoe Ozero, Russia.
"Jimmy is on the up-and-coming for sure, he's only 17 and has tons of potential and 'JBK's' results speak for themselves - he skied well at the World Championships and was named World Cup Rookie of the Year.
"As a moguls team we took six medals here and that just goes to show how much depth we have. This was a great week for the whole Team; all these skiers are super enthusiastic and that really shows up in what they're doing on the snow and that's so much fun to work with," said Rawles.
The entire Junior Worlds Team will head directly to Killington, VT for the Sprint U.S. Freestyle Championships, which open Thursday with halfpipe.

***
Sugarloarf
The clouds have begun to roll in though, and forecasts are calling for us to get an inch or two of snow overnight. And we could see a squall tomorrow that will give us another inch.

Groomers will be out again tonight, tilling out the 14 inches of snow we got in Saturday's storm into super soft corduroy on 66 trails. The conditions are excellent, and you can still find powder stashes along the trees.

Lower Narrow Gauge and Lower Competition Hill will be closed to the public for the rest of the week as crews start to build the course and athletes arrive in preparation for Saturday's Champion's Cross Sugarloaf Open, hosted by Seth Wescott. The top 24 snowboard cross riders in the world will be here at Sugarloaf competing for more than $50,000 in prizes.

Champion’s Cross Sugarloaf Open hosted by Olympic gold medalist Seth Wescott is this weekend here at Sugarloaf/USA. We have 24 of the world’s best snowboard cross athletes competing for $50,000 in cash and prizes. The schedule of events for Friday and Saturday is as follows:
Friday, Mar. 23
10 am – 2 pm Time Trials Comp Hill

Today..Snow Heavy At Times. Alpine Temperature Steady Near Minus 3. Snowfall Accumulation 15 To 20 Cm. Freezing Level 1500 Metres. Tonight..Flurries Heavy At Times. Alpine Low Minus 7. Snowfall Accumulation 10 To 15 Cm. Freezing Level 1200 Metres Lowering To Valley Bottom Overnight.
....don't miss Harmony or Big Bang !
New High Speed Lift Provides Access to Symphony Amphitheatre, one of the Most Spectacular High Alpine Areas Available in North America Whistler Blackcomb announced that the new lift-accessed area in the high alpine of Whistler Mountain will be crowned the Symphony Amphitheatre to reflect its spectacular natural amphitheatre-like terrain. The area will be accessed by the newly named Symphony Express.
The Symphony Amphitheatre brings to the fore one of Whistler Mountain's favorite in-bounds backcountry experiences. Long referred to by locals as the Musical Bumps, Piccolo, Symphony and Flute Bowls are the encore to Whistler's Harmony Bowl, but until now have been reserved for those willing to hike for their turns. This winter, the Symphony Express will provide access to over 1,000 acres of this intermediate and advanced terrain.

Music at Noon:
Enjoy a variety of musical styles from classical to contemporary in next week’s final Wednesday noon-hour concert.
Canmore Sundays:
Sunday March 18 at 2:30 p.m., enjoy a spectacular concert of beautiful chamber music, performed by an incredible cast of international musicians.


***
Ski New Hampshire tourism
12"+ of snow in much of New Hampshire. The storm does look tricky, with a chance of it switching over to sleet and/or rain in some areas. The timing could make for some difficult travel, so please take your time. I'm sure many of you are already planning to leave work early today. As far as NH ski country goes, it sounds like it will be starting this afternoon/evening here and continuing until tomorrow afternoon.
We've just enjoyed our first few days of spring skiing, and now it looks like this storm should refresh us back to mid-winter conditions! That means the glades and natural snow trails will reopen, so you should see increased trail counts as the weekend progresses.
March is a great time to hit the slopes. There's the deep snowpack of a season's worth of snowmaking and snowstorms, combined with the warming sun that gives us goggle tans and makes it feel so good to be outside. We've made it easy to plan your trip with the Ski NH Spring Getaway Guide. It features ski and stay packages, lift tickets savings, news on spring events, snow conditions and this week's on slope video.
www.skinh.com

www.vallenevado.com/
Time to plan for the other winter!


***
Heavenly Valley
It is a "Kids Ski Free" promotion. For anyone who books a package with our Heavenly Tahoe Vacations department for the remainder of the season. Everyday an adult skis kids 12 or younger will ski or ride for free! A package is defined as a minimum of lodging and lift ticket. This special is not bookable online, one must phone 1-800-HEAVENLY. www.skiheavenly.com. 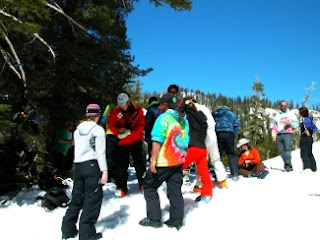