Kvitfjell
The mountain is now open and filled with a lot of fun for both young and old. The snow condition in the slopes is great and the Après Skis are open. What more can you ask for? 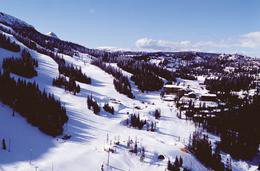 The youngsters can enjoy themselves in the kids’ slopes, where service minded staff will take good care of them. If they get tired, they can always pay "Bamsebo" (a small lodge) a visit, where they can watch videos, draw, play or just read a book.
After a few runs in the slopes, we all get tired and what could be better than to enjoy a hot chocolate or something to eat (homemade food of course) at Mammut Mat & Bar, the new restaurant/cafè in Kvitfjell? Mammut Mat & Bar also caters food to the lodges in Kvitfjell for those of you who would like some extra luxury while you are on vacation.
For more information regarding Mammut Mat & Bar call +4741915622 or send an e-mail to peter@kvitfjell.no.
Kvitfjell is not the largest ski destination in the world, but many people declare that it is one of the best. The reason is probably the variation of the slopes skiers will find here. For the youngest as well as for beginners we have small bunny hills and for the more advanced skiers we can offer steeper slopes where the skies really catches wind. Skiers at all levels will find their own challenge in Kvitfjell that is why so many ski enthusiasts return to our destination.
Facts Number of lifts: 7 Lift capacity: 8100 p/h Longest run: 3500 m Vertical drop: 840 m Highest mountain: 1044m Kvitfjell Norway

The 1992 Albertville Olympic Games were the last Winter Games to be staged in the same year as the Summer Games. Only 18 of the 57 events were held in Albertville itself, while nearby resorts hosted the rest. Freestyle skiing and short-track speed skating made their debuts as medal disciplines, as did women’s biathlon. Norwegian skiers won every cross country skiing race, as Björn Daehlie and Vegard Ulvang each won three gold medals. Speedskater Bonnie Blair won the 500m and 1,000m events, while Gunda Niemann took both of the longest races. At age 16, ski jumper Toni Nieminen became the youngest male winner of a Winter event. Alpine skier Petra Kronberger won both the combined event and the slalom. Ki-hoon Kim earned gold medals in both short track events. Participation: 64 NOCs (Nations) 1,801 athletes (488 women, 1,313 men) 57 events