***
FIS
New world speed records as highlights of Speed Skiing season Philippe May (SUI) Verbier Speed Skiing Piste This season's Speed Skiing calendar had a new look: it consisted of two races at Sun Peaks (CAN), one each at Orsa (SWE) and Hundfjallet (SWE), and the fifth and final race in Verbier (SUI) - the most impressive race of the series. In addition, most competitors also participated in the Pro Mondial races in Les Arcs and Verbier. For the first time in years, there were no Austrian races and Leysin (SUI) was unable to participate as well. The penultimate event, planned for Cervinia (ITA), unfortunately had to be cancelled due to unseasonable warming.
In the men’s World Cup competition, Simone Origone (ITA) proved to be invincible, winning all five World Cup events to earn a ‘perfect’ 500 points. The competition for the next six places remained open right to the last race, with only 5 points between Philippe May (SUI) and Roger Wickman (SWE), which is the way they remained to the end, albeit with some last minute challenges from John (Mad Cow) Hemble (USA) and Jonathon Moret (SUI).
For the ladies, the reigning champion – Tracie Max Sachs (USA) – gained and retained an early lead, before rivals Kati Metsäpelto (FIN), Elena Banfo (ITA) and Sanna Tidstrand (SWE) in this order. Sanna’s performance was all the more remarkable because she only competed in two World Cup races, getting podium places in both.
Traci Max send in updates from time to time.I wish her the vey best. She has allowed use of her personal collection of Euro Resort Pics.

The last Coordination Group meeting before the final inspection in September, held on April 24th – 25th, was well prepared by the Åre 2007 Organizing Committee. The agenda focused on the lessons learned from the FIS World Cup Finals, whilst looking ahead to the 2007 FIS Alpine World Ski Championships presented by Carlsberg.
Logistical matters are progressing according to schedule with accommodation, accreditation and security - the police are particularly confident after handling a NATO meeting last year in Åre with 1,700 police officers! Transportation will receive special attention in the coming months, notably in trying to deal with the transportation of luggage through Stockholm airport.
The main challenge, and the focus of the Organizing Committee's upcoming efforts, is to attract as many spectators as possible to create a real championships ambiance for the best athletes in the world. Numerous initiatives were presented to offer an exciting, vibrant side program as well as special initiatives for ski clubs and local youngsters.
One particular aspect to mention is the strong support of the community and of the mayor herself with the 2007 FIS Alpine World Ski Championships in Åre being the main focus of all activities and development in the town.

FIS Tour de Ski 2006-2007
just 251 days away, the detailed planning and organization are coming to full speed. Representatives of the Tour’s three hosting National Ski Associations (Czech Republic, Germany, and Italy), local organizing committees from Nove Mesto (CZE), Oberstdorf (GER), Asiago and Val di Fiemme (both ITA), and FIS met in Munich on Friday, 21st April, 2006 for a detailed status review. The agenda included thorough discussions and next steps for the Tour’s marketing, several logistical issues, event production and milestone planning, among other areas. “We are quite pleased to host the opening stages of the first-ever FIS Tour de Ski in Nove Mesto on 29th and 30th December, 2006. Based on our experience in the previous years, we can guarantee the event a great start before an enthusiastic and traditionally very large audience,” Petr Honzl, General Secretary of the Nove Mesto organizing committee commented. Petr Lamplot, the representative of the Czech Ski Association on the Tour Board, added: “Following the success of the Czech cross-country skiers at the Torino Olympic Winter Games, where we won three medals, the FIS Tour de Ski is a great opportunity to showcase Cross-Country Skiing in the Czech Republic.”
FIS

Winter has arrived, temperatures are dropping towards zero, its flooding all round the region, and snow is dumping on Cardrona! A great season is in the making and the best way to enjoy it is with a season pass. Discounted pre winter season passes are available until the end of the week... 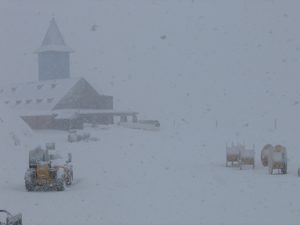 ***
PyeongChang - Korea
The South Korean province of Gangwon, which narrowly lost out to Whistler in its bid to host the 2010 Winter Games, is optimistic that its bid to host the 2014 Olympics will be successful. In its favour are the fact that it will be 16 years since Asia last staged the games, at Nagano in Japan with North America hosting two, and Europe one Olympics since. Secondly winter sports are booming in most of the region, apart from Japan, which the numbers of skiers and boarders growing rapidly in China and Korea in recent years. Thirdly Gangwon Province, which includes PyeongChang, symbolizes the divided Koreas’ hope for reunification because the region is shared by South and North Korea. Then there is the area’s near victory in the last bidding process for 2010. Han Seung-soo, chairman of the country’s 2014 Winter Olympic Games bid committee told the Korea Herald that the city’s hosting of the Games would help revitalize the regional economy and expand the Olympic Movement in Asia. The GamesBidIndex on Olympic Games Bid website www.gamesbids.com currently puts the Korean bid marginally in third place behind Salzburg in Austria and Sochi and Russia. The four other bids for 2014 are Jaca (Spain), Sofia (Bulgaria)and outsdsiders Almaty (Kakakstan) and Borjomi (Georgia). There are no North American bids.
A short list of ‘finalists’ is expected from the IOC on June 21st with a final decision on the host venue to be announced on July 7th, 2007, at an IOC session in Guatemala City.
Salzburg, Almaty, Borjomi, Jaca, Pyeongchang, Sotchi, and Sofia put in bid for 2014
USOC / IOC Olympic Comittee
www.gamesbids.com 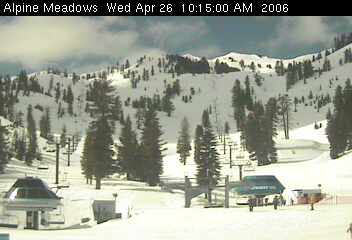 Photo:Alpine Pic of the day
Event
Mad Cow Downhill May 13