***
VAL D’ISERE, France (AP)—Austria’s Kathrin Zettel has won the super-combi at the world championships, while American Lindsey Vonn was disqualified for splitting a gate in the slalom run. Zettel won in a combined time of 2 minutes, 20.13 seconds Friday. Swiss teenager Lara Gut finished second, 0.56 seconds behind, and Elisabeth Goergl of Austria was third. The top U.S. finisher was Stacey Cook in 16th place. Vonn posed for pictures as if she had won the silver medal before her husband gave her the bad news.

“I’ve been feeling so great this week,” said Vonn, who won the worlds super-G on Tuesday. “To come down hard like that today is hard to take.” Vonn led after the downhill leg and was second fastest in the slalom, but replays showed she barely split a gate in a wild run. The American held a 1.48-second lead over Zettel going into the slalom, but made two big errors on the upper section of the twisting and technical Rhone-Alpes course.
“Sometimes when you miss a gate with a hairpin, you can make the outside gate and I thought I made it,” Vonn said. Vonn’s coaching staff went into the race jury room to check the tape and decided not to appeal after confirming she did split it. “I was really confused for a while and really frustrated,” she said. Vonn and was aiming for her fourth consecutive victory in a week, having posted World Cup wins last weekend in Garmisch-Partenkirchen, Germany. She is still the favorite for Sunday’s downhill race.

“I’m going to work hard and do everything I can to be on the podium in that race,” Vonn said. Zettel was fifth after the downhill leg and third-fastest in slalom. “I’m really surprised at this gold medal because Lindsey was quite in front of us after the downhill and she’s a good slalom skier,” Zettel said. “When she has a normal run she can (win) the gold medal.” Zettel finished fourth in the super-combi at the 2006 Turin Olympics and was fifth at the 2007 worlds in Are, Sweden. She has won five World Cup races, all in giant slalom.

Defending champion Anja Paerson of Sweden missed a gate in the downhill leg, losing control for an instant after posting the fastest first split time. Paerson also failed to finish the super-G that opened the championships Tuesday, won by Vonn.
“I think these World Championships are all about bad luck for me,” Paerson said.
Maria Riesch of Germany finished fourth after struggling in slalom. She had won four straight slalom races earlier this season, but bruised her knee and back in a downhill training crash on Wednesday. “I could have won a medal if I could have just skied down as normal,” Riesch said. “I really had to overcome that. This morning I still felt a little bit stiff.” Julia Mancuso of the United States veered off course out of frustration in the downhill run. She has decided to sit out Sunday’s downhill.
The 17-year-old Gut nearly matched Vonn in the downhill portion, finishing 0.14 behind, and attacked in the slalom leg.
Gut finished fifth in her only World Cup super-combi on home snow in St. Moritz in December. She has never entered a World Cup slalom and this is her first major championship. It was the first medal at a worlds or Olympics for Goergl, who has won two World Cup giant slaloms. She is the daughter of 1960 and 1964 Olympic downhill bronze medalist Traudl Hecher.

BOULDER, Colo. (AP)—Freeskiing star Tanner Hall has been given a six-month deferred sentence after pleading guilty to possession of drug paraphernalia.
The 25-year-old Hall, of Kalispell, Mont., entered his plea Thursday in Boulder County Court.
Carolyn French, a spokeswoman for the Boulder County district attorney’s office, says the plea agreement also calls for 16 hours of community service and payment of court costs.
Hall was cited Dec. 11 after police spotted a group of people doing ski stunts outside a Boulder high school. Boulder police spokeswoman Sarah Huntley has said officers approached the crowd and smelled marijuana. They asked who had the pot, and Hall stepped up, saying it was his.
Hall has won seven Winter X Games gold medals.

Panorama Snow Express:
Travelling from Banff? Check out the Panorama Snow Express. Your ticket to ride is only $99.00 (plus GST) for return transportation and a lift ticket. You'll travel through Banff and Kootenay National Parks, and the views alone are worth the trip. Call today to book! 1.403.762.5900 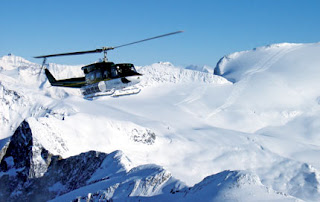 RK Heli-Ski welcomes you to 1,500 square kilometres / 930 sq. miles of incredible terrain in the spectacular Purcell Mountains, on the edge of the legendary Bugaboos Daily heli-skiing is at a comfortable pace and is always in a group supervised by a certified professional mountain guide. Your heli-ski day starts with pre-orientation at 9:30am and includes three mountain descents, a picnic lunch, certificate and pin. www.panoramaresort.com

***
Pitztal Glacier
Austria’s highest glacier ski area and winter resort area, Rifflsee is an attraction drawing energetic skiers, a typical winter sporting vacation, and for guests who want to enjoy skiing or snowboard-ing at an elevation where there’s guaranteed snow. 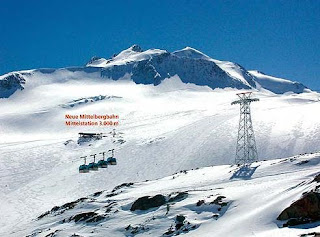 
***
FIS SKI NEWS
A four race line up was on the schedule in the Freestyle FIS World Cup which continued in Deer Valley (USA), the host of the 2011 FIS Freestyle World Championships. In the moguls, Hannah Kearney (USA) and Guilbault Colas (FRA) were best on a long, icy and fast course. In the aerials event, Ryan St. Onge (USA) won the men’s competition after landing a landmark new jump whilst in the ladies event, China took a double victory with Nina Li and Xinxin Guo. Canadian Steve Omischl and Lydia Lassial remain first in the overall aerials standings after five of eight events scheduled for this season. In the inaugural World Cup half-pipe competition held in at Park City Mountain Resort, Angeli VanLaanen (USA) earned a big win Friday in her first World Cup over Canadian Megan Gunning.. French skiers Kevin Rolland and Xavier Bertoni, winner of season’s first competition, dominated the men's pipe, with teenager Walter Wood (USA) third. Swiss Virginia Faivre, who finished fourth, continues to lead the ladies’ rankings. In the final event, dual moguls, Canadian Jennifer Heil defeated World Cup leader Kearney in the finals. In men’s dual moguls, Colas completed a golden sweep in Deer Valley with a win over David Babic of the U.S. in the final. World Cup leader Alexandre Bilodeau (CAN) took fourth.

More than 600 athletes and officials from 33 nations, including some first time nations, have registered to participate in the 13th FIS Freestyle World Championships in Inawashiro 2009. The teams will begin to arrive from the end of February for the event that is scheduled to begin on 2nd March 2009.

On the opening day, the ski cross finals will begin the competitions followed by the evening opening ceremony and a welcome party to be held at the Inawashiro Town General Gymnasium “Camerina” to welcome all the 2’000 participants from around the world. As a special opening attraction, the popular Japanese artist “SUKIMASWITCH” will perform as a special guest to provide a spectacular launch for the event along with various folk music performances. The award ceremony will feature, among other things, children in Samurai costumes performing traditional sword dances.

The Organizing Committee plans to welcome everyone involved with Japanese hospitality.” It has put special emphasis on local culture and will serve local produce to allow the participants experience the fascination of Fukushima to people from Japan and all over the world.

On 7th and 8th of March during the moguls & dual moguls events, another special event will provide the opportunity to experience snow sports in Tokyo, the Japanese metropolis. On both days, a special stage will be set up in front of the Tokyo Metropolitan Government Tower featuring a quarter-pipe and opportunity to try sledding. Inawashiro 2009 competitions will also be aired live on a giant screen in the center of Tokyo.
For more information, visit www.inawashiro2009.jp


Globe de Cristal -FIS World Cup Freestyle Final
March 18- 21st
An end-of-season meeting where the Globe de Cristal is often decided. La Plagne, the French resort that has always epitomised freestyle skiing, lays on every facility to welcome the competitors at the end of their world tour. Skicross, which is to be an Olympic event in 2010, is being featured and the competitors’ runs are often extremely impressive!
The bumps will held on the Jean-Luc Crétier course

Cam Shot of the day ! 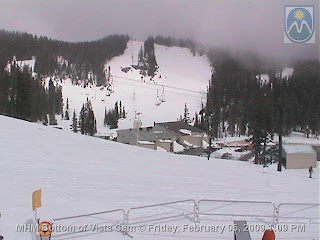 MT Hood Marketing
More Off-Piste Access
Nearly 200 acres of off-piste advanced terrain will become accessible this season. 150 acres skier’s left of the Hood River Express lift will open up gladed runs, steep chutes and cliffs, similar to the adjacent Private Reserve which is also managed with control gates and is for experts only. Another 20 acre area located skier’s right of the bottom of Hood River Express lift featuring similar terrain will also be opened for experts only.

Purchase 10 gallons or more of gasoline from a participating Shell service station and receive a "Ski Free" coupon, which provides you one "Free" Wednesday eveing (3-9PM) lift ticket with the purchase of a Wednesday night (3-9PM) lift ticket. Both tickets must be used the same evening. Details including participating service stations can be found at www.skifreedeals.com. 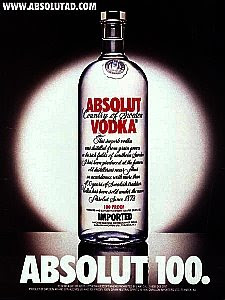 Closed for the weekend, gone skiing